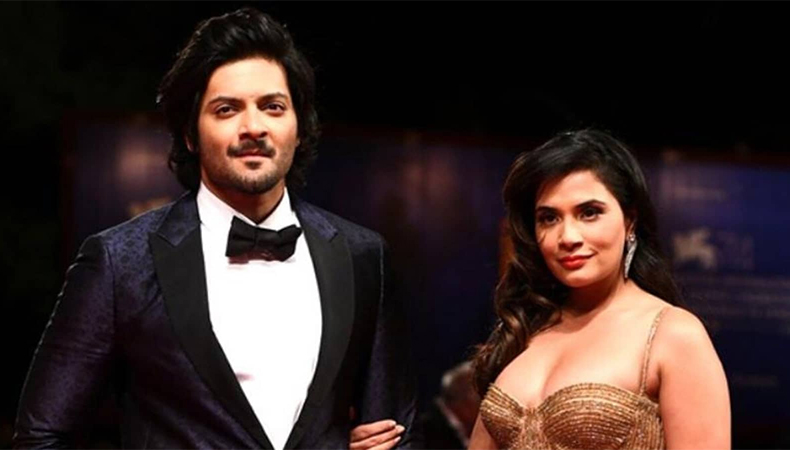 The most awaited Bollywood wedding took place on October 4th, 2022, and the internet is flooded with their wedding pics. Yes, we are very much referring to Ali Fazal, and Richa Chadha’s star-studded wedding ceremony.

The couple fell in love after meeting on the set of their movie Fukrey. They dated for ten years before getting married.

Just in the month of August, they broke the news about their wedding in October, and look, the two got married in an intimate wedding ceremony.

They shared the news about their upcoming wedding with the world via an audio tape that was uploaded to Instagram.

The couple shared their story, saying, “Two years ago, we decided to make our relationship official, and at around that time, the epidemic struck all of us. And now, as we are all able to take advantage of this brief period of reprieve, we are finally able to celebrate with our families and friends, and we are feeling extremely moved and appreciative for all of the blessings that are coming our way.”

According to a source close to the couple, “Richa Chadha and Ali Fazal have been legally married for 2.5 years when they registered their wedding.”

On September 29th, the couple took to their social media handles and announced that they are currently celebrating their union with friends and family.

The two arrived in Delhi a few days back for their pre-wedding festivities. Reportedly, the couple’s wedding ceremony took place at a South Mumbai hotel. Ahead of their grand wedding, they hosted an intimate dinner gathering for their loved ones on Wednesday night in Delhi. Their pre-wedding festivities began with an intimate cocktail party, followed by a Mehendi event and a sangeet.

Finally, the two got married and the internet is flooded with their wedding images. They celebrated their marriage with parties and celebrations in Delhi and Lucknow, with their wedding reception taking place in Mumbai. Their wedding ceremony was held in a leased villa, followed by a large reception held at a hotel in South Mumbai.

According to the statement, their goal was to “celebrate both their Punjabi and Lucknowi traditions.” 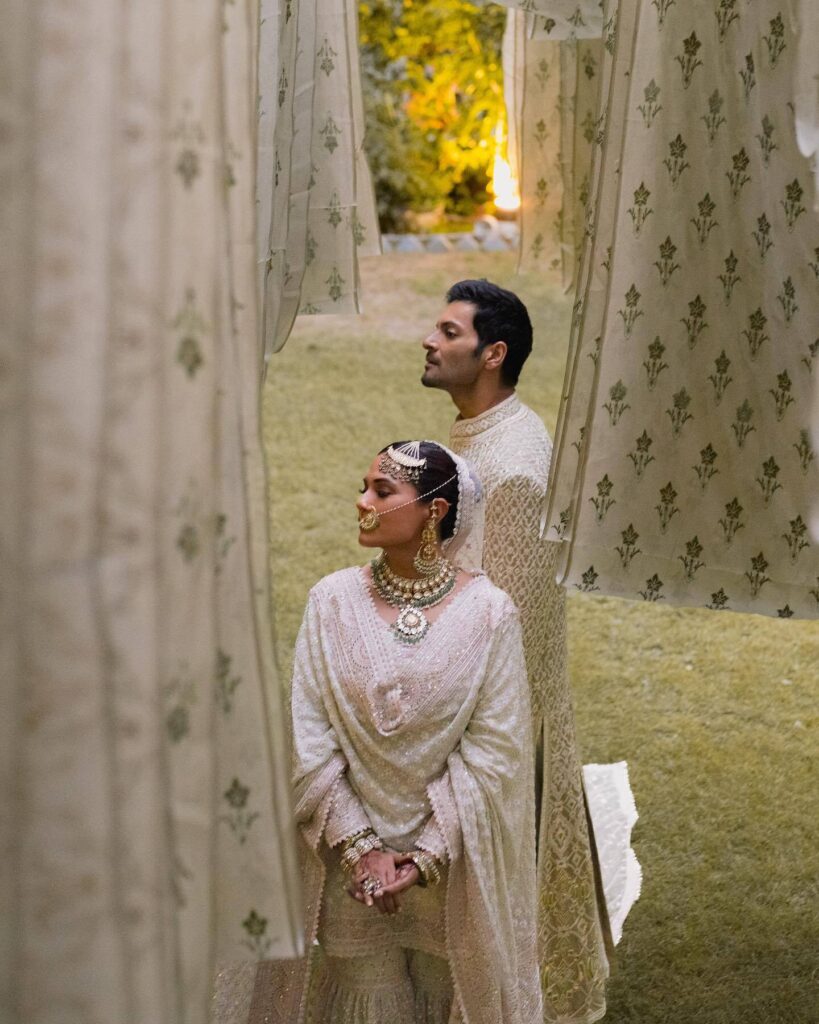 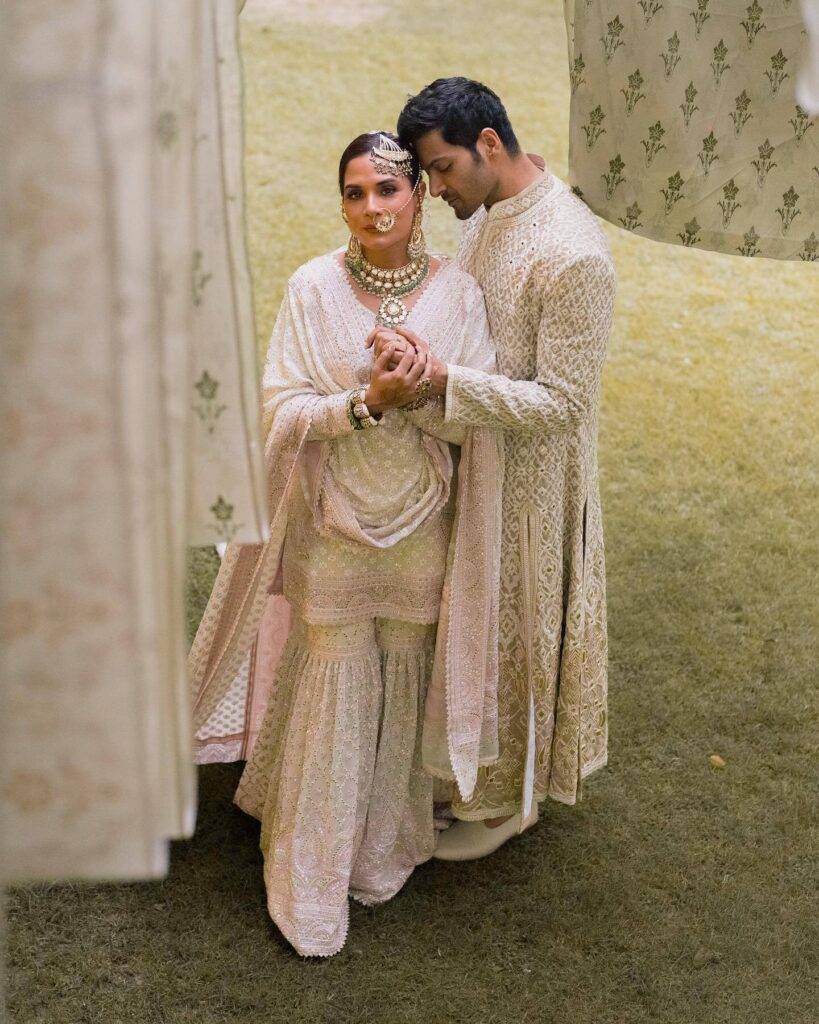 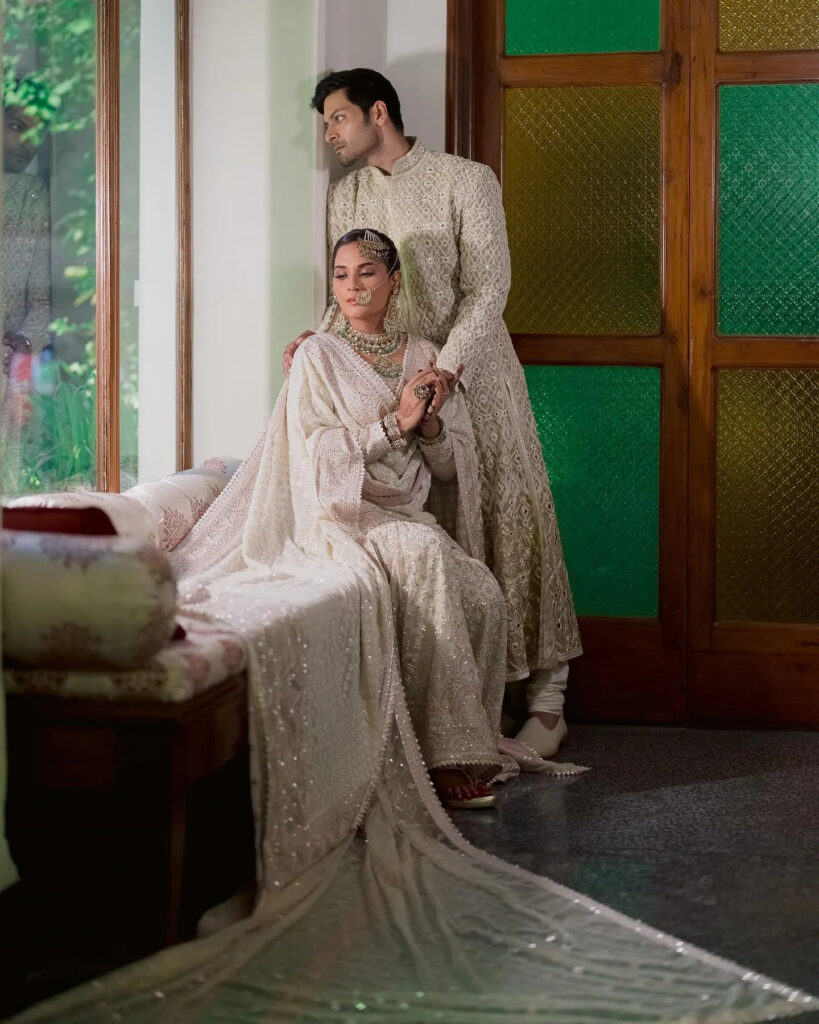 Ali and Richa hosted a lavish cocktail party, Mehendi event, and sangeet before the BIG DAY. Videos of the couple dancing to the song “Ranjha Ranjha” while they were showered with affection and flowers have gone viral on the internet.

Both Richa and Ali looked their best in their wedding attire. Richa opted for an off-white sharara suit, while Ali donned a sherwani that was gold and beige in color. 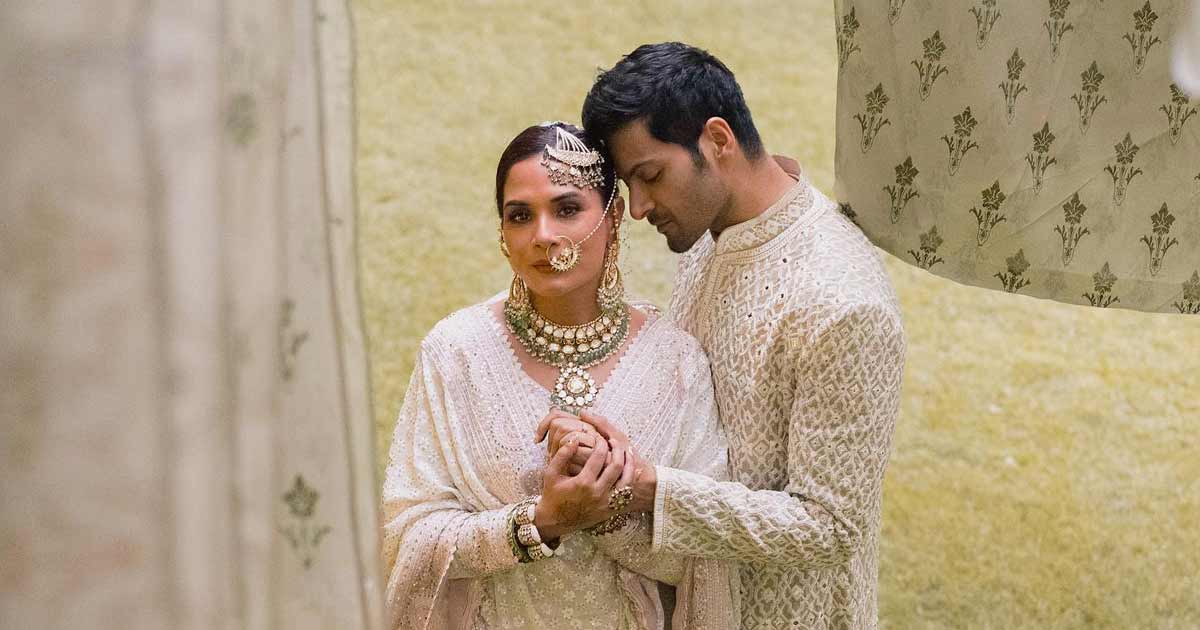 Chaddha’s costumes were specially designed by Kresha Bajaj, who is renowned for her spectacular bridal gowns, and Rahul Mishra, who never fails to set the gold standard for craft and couture. On the other side, Fazal wore prized designs by couturiers Abu Jani and Sandeep Khosla, as well as Shantanu Nikhil.

The photographs from Richa Chadha and Ali Fazal’s wedding have been released, and the newlyweds look absolutely lovely in their royal garb designed by Abu Jani Sandeep Khosla.

The celebrity pair has been sharing behind-the-scenes photographs from their pre-wedding rituals over the course of the past few days. These images range from the sangeet, at which the bride wowed in a flowery Rahul Mishra lehenga, to the cocktail, at which she wowed in a Kresha Bajaj gold sari. 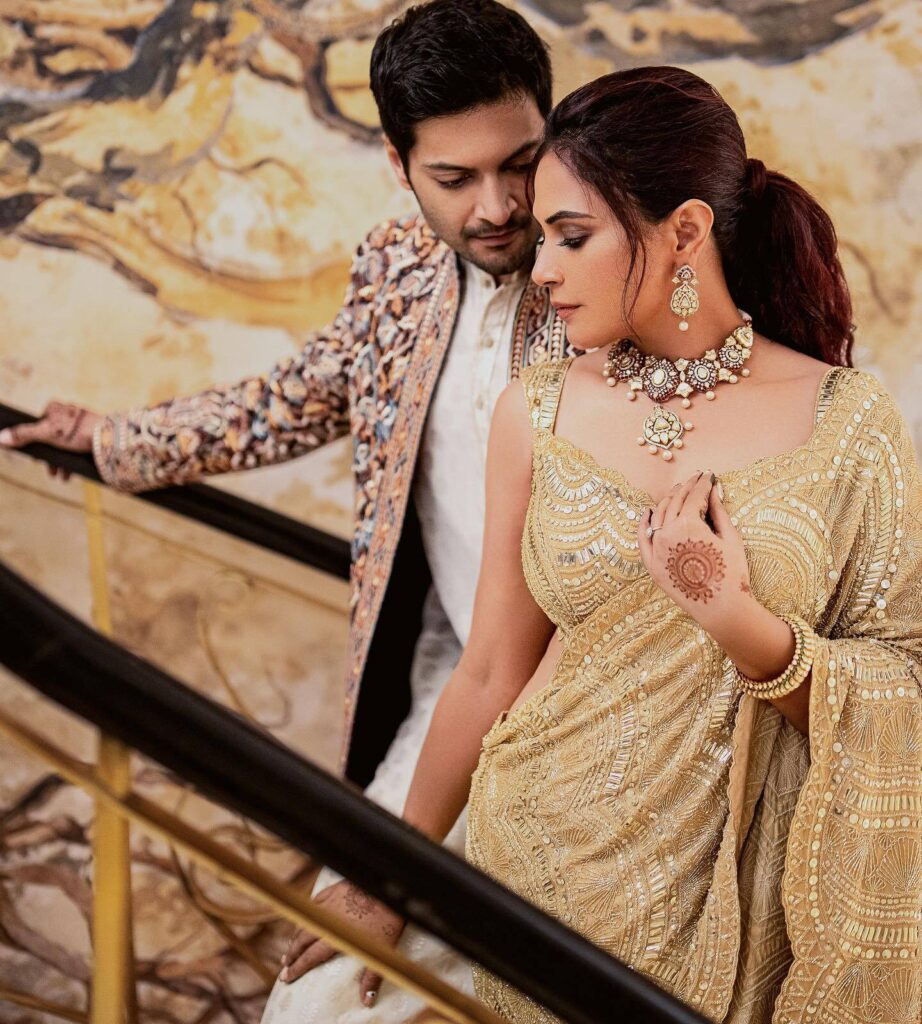 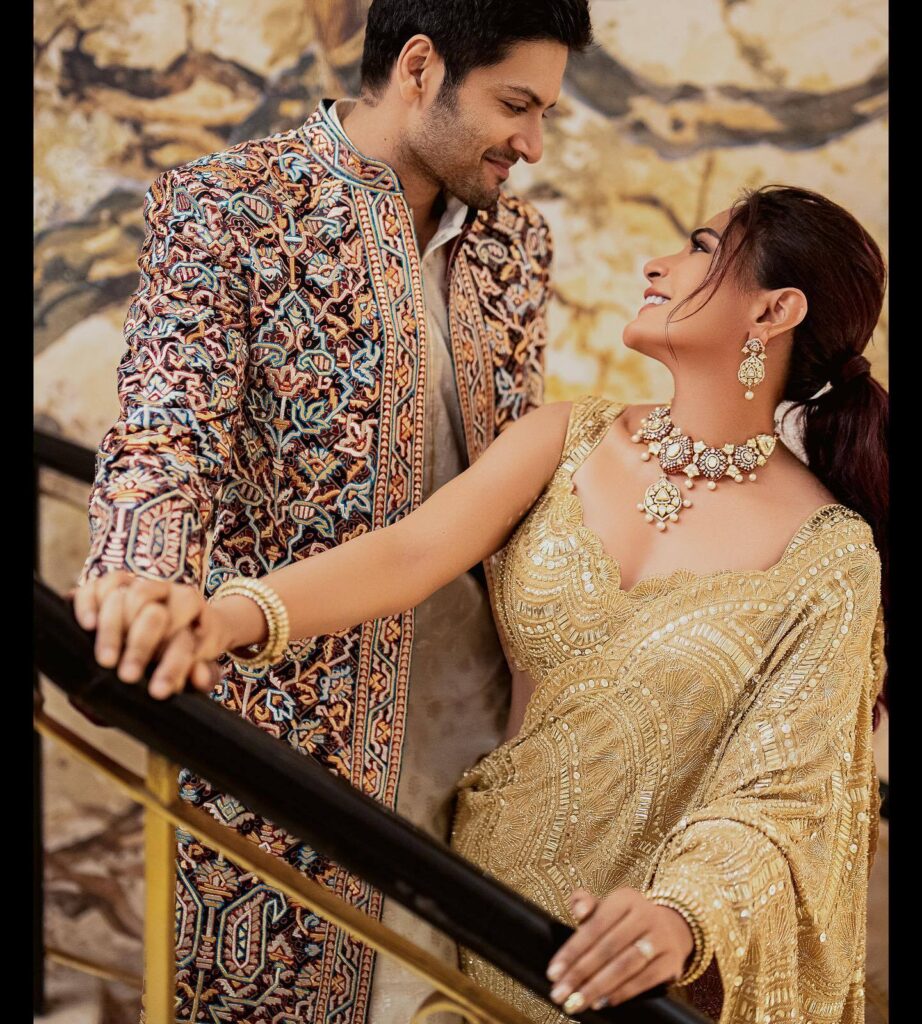 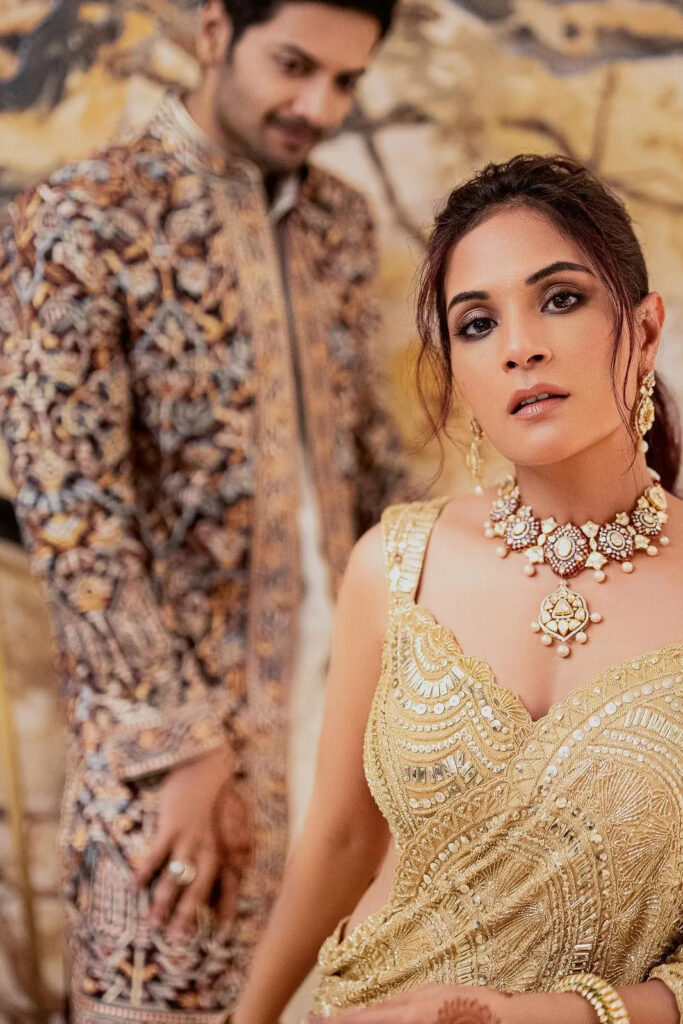 The couple planned to host an intimate and unique wedding celebration. Regarding the cuisine, the Fukrey duo paid homage to Chaddha’s most beloved dishes from restaurants all around Delhi. From the chholey bhature at Rajouri Garden to the chaat at Natraj. They made sure that the cuisine was delectable and unique in every manner.

In addition, the famous Sabri Brothers from Rajasthan were there to give their stunning qawwali performance at the wedding.

Lebua, a heritage hotel in Lucknow, took care of the wedding catering.

When it came to the decorations for the wedding, the Awadhi Lucknowi culture was taken into consideration during the design process.

At his ancestral home in Lucknow, Ali lavishly welcomed his new bride.

Both Richa has been in a relationship for the past ten years. Richa Chaddha, who made her breakthrough with the movie “Gangs of Wasseypur – Part 1 in the year 2012, was born in Amritsar but raised in Delhi. She spent a significant portion of her childhood in Delhi prior to beginning her career in the film industry.

Ali’s family is originally from Allahabad, Uttar Pradesh. However, they eventually relocated to Lucknow, and it is where he spent the majority of his youth. While he was a student at the Doon School in Dehradun, Uttarakhand, he first became interested in performing on stage. After that, he continued his education in Mumbai, and it was there that he ultimately decided to pursue a career in acting.

The internet is already flooded with their wedding images; you can visit their Instagram to see their wedding pics. It has it all, from their Haldi pics to Mehendi images, along with their dance videos.