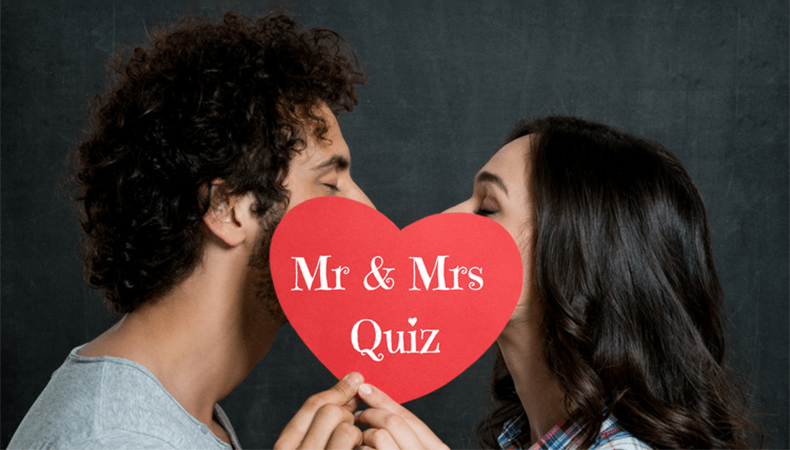 Mr. & Mrs. Game may be new to you but it is played quite often in the western countries. The Mr. & Mrs. Game, also referred to as the Paddle Game is one of the best games played in weddings during the speeches. The aim of playing this game is to break the ice between the guests and to know how well the couple knows each other. This is decided based on the maximum matching answers.

This game can be played with or without penalty. It is absolutely up to you. If you want to add to the fun element, adding penalty is a great way. Penalties could be anything from a prize to a dare for each wrong answer.

It is an absolute fun game, meant to make the atmosphere light and fun. So, it is imperative that you do not add too serious or too difficult questions in your game. Also, be mindful of your audience while you select the questions for your game. It is a simple game in which few questions are asked from the couple to check their compatibility. So, it is important that the whole questionnaire is simple and fun. It should not be meant to humiliate anybody!

Here we are sharing with you top 150 Mr. & Mrs. Quiz questions along with the rules of the game. Do pick the ones that suit your needs best.

#2. Where did you go on your first date?

#7. What is his most annoying habit?

#8. What did he say was your most annoying habit?

#9. What do you like the most about his dressing style?

#10. Who would make the worst politician you or him?

#15. What was his first impression of you?

#16. What was your first impression of him?

#27. What does he despise the most about you?

#28. What does she despise the most about you?

#29. Who maintains the most cleanliness?

#33. What’s the weirdest thing about him?

#34. What’s the weirdest thing about her?

#35. With what name he/she has saved your number on his/her phone?

#37. What’s his/her favorite thing for you to wear?

#40. What is his/her favorite time pass?

#41. Which is his/her favorite TV serial/series?

#47. Which of his/her clothing items do you hate the most?

#51. If he/she were on ‘Who Wants to be a Millionaire’, who would his/her phone a friend be?

#53. What was the best gift that he gave you? (Excluding the proposal, engagement ring, etc.)

#54. What according to him/her is your best feature?

#58. What color does he/she think you look best in?

#59. Which is his/her favorite drink?

#62. Who indulges in caffeine the most?

#63. Who cooks the best spaghetti?

#70. Which is his/her favorite perfume brand?

#71. Do you like the smell of his perfume or you simply despise it?

#80. What’s your best impression about him?

#81. What according to him/her is your best quality?

#82. Who will be the most hung-over after the wedding?

#83. Your clothing item that he/she hates the most?

#84. Who is most likely to deal with a spider/cockroach/lizard?

#86. What is his/her favorite pizza topping?

#87. Name of the first movie that you two watched together?

#88. What is that one thing he/she is most likely to go viral for?

#90. Which color tie/shirt/pants he has the most?

#91. Which is his/her favorite color?

#94. Who is more health conscious/fitness freak?

#95. Would he/she rather spend an evening in with you or a night out with you?

#98. Which is his/her favorite holiday destination?

#99. What are the things you most likely to argue about?

#100. If he/she has to throw a themed party what would the theme be?

#101. Who has the worst handwriting ever?

#102. What would be his/her favorite job, other than the one he/she is doing now?

#103. Who do you think is perfectionist?

#104. If he/she could only eat one food item for the rest of his/her life what would that item be?

#109. If he/she gets a chance, then what celebrity would he/she want with him/her on a desert island?

#110. If you get a chance what would you want to change in him/her?

#118. Which is your favorite brand of watches?

#119. How would you describe him/her, a beach person or a mountain person?

#120. Who is more passionate about life?

#136. Who has the best design and décor taste for home?

#141. Which is his favorite sex position?

#150. The craziest place where you two made out?

#151. The sexiest thing that you two have done?

So, these are the questions that you can have in the Mr. and Mrs. Game. You can play the game either in rounds or simply. Here are the rules to play the game.

STEP 1 – Pick a selection of questions (like 20 – 25) from the list above and make a questionnaire. If you want you can even add your own questions to the list that fit the couple perfectly.

STEP 2 – Take printouts of the questionnaire, make sure you take two copies and give one copy of questions to the groom to answer honestly. Ask him to send his honest answers. Also, make sure that you keep his answer secret from the bride.

STEP 3 – You can give the second copy of questions to the bride at the hen party and ask her to answer them before the groom reveals his answer.

STEP 4 – After each answer given by the bride, reveal the groom’s answer to see if it’s matching or not. It is up to you, you can either ask the bride alone or you can have a team to take care of that.

It is one of the funniest games that you should surely incorporate in your friend’s wedding, especially if you are a maid of honor in your best friend’s wedding. Maid of honor is supposed to take care of a lot of tasks at the wedding. She does everything from supporting the bride to make the event classy to incorporating some fun elements for the bride and groom, like the Mr. & Mrs. Game.