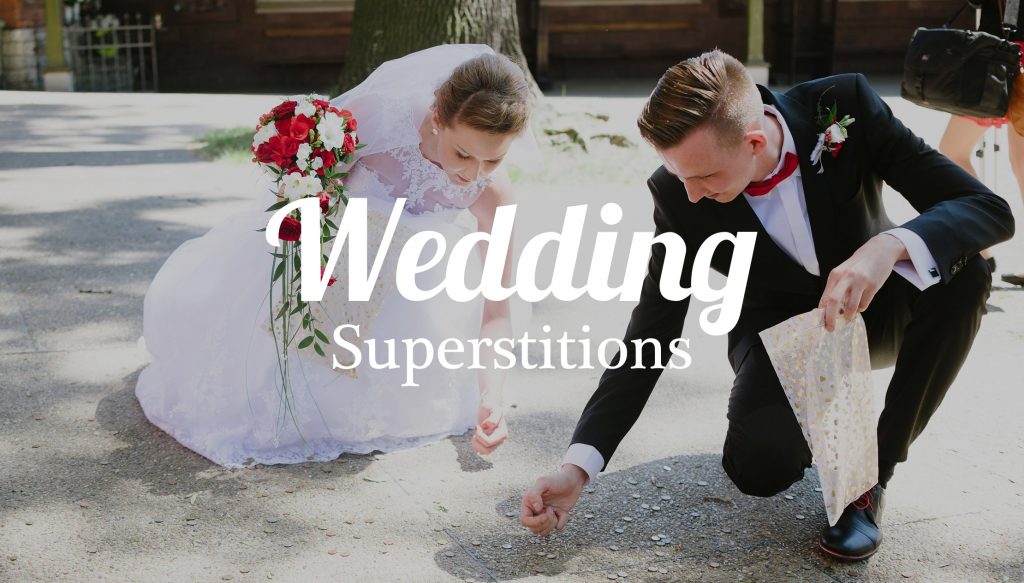 Weddings in any culture, religion, state, country, and continent are a blend of ancient rituals, traditions, customs, faiths and beliefs. Every culture and religion in the world follow their own set of beliefs and rituals during their wedding traditions. However, not just beliefs there are superstitions as well.

Well, in this post I am sharing with you the list of wedding superstitions followed across the world

1. During the wedding, the happy couple in Greece hand out sugar-coated almonds, which is called ‘koufeta’, to their guests. The white part of the almond symbolizes purity, the egg shape stands for fertility. The hardness of the almond represents the endurance of marriage, and the sugar in almonds represents the sweetness of married life. It is to wish the newly married couple “happiness, children, health, wealth, and a long life.” According to tradition here, if an unmarried girl take the blessed snacks and sleep with it under her pillow for three nights, she’ll see her future husband!

2. In Egypt, during a wedding, the hands of the couple are tied to depict the union of two souls.

3. Saturday is considered the unluckiest day for tying the knot in English culture.

4. According to the Greeks and Romans, a veil worn by Christian brides on their face during the wedding protects them from the evil spirits who were jealous of her happiness.

6. During an Egyptian wedding, all women wedding guests would pinch the bride before the wedding and this is considered a sign of good luck in Egypt.

8. Many English traditions consider finding an eight-legged creature (spider) in/on couple’s wedding outfit a sign of good luck. I am sure people might get scared for a while ☺ ☺

9. In Indian weddings, while leaving their house with their partners, newly brides throw rice back to their house without looking back. And the tradition states that even after the daughter of the family (i.e. bride) is gone to her new house, her family will always prosper and be happy. Because girls are considered LAKSHMI (which literally means money & prosperity) in most traditions in India.

10. In Indian weddings rice is thrown on the newlyweds to welcome them at the groom’s house.

11. In Czech Republic, peas are thrown on the newly-weds for welcoming them.

12. Believe it or not, any bride who passes the path of a monk, nun or any such religious figure will have a life of poverty and infertility after her wedding.

13. Wearing “something old” symbolizes the bride’s past, while the “something new” represents the couple’s happy future. The bride in English tradition is supposed to get her “something borrowed” from someone (who is happily married) in the hope that, that person’s good fortune will come to her as well. While, “Something blue” denotes fidelity and love.

15. Brides after their mehndi ceremony in India cannot move out of their house to avoid evil spirits.

16. Brides are not allowed to write or use their married name or monogram before their wedding, it is believed that if she does so the wedding will not take place.

17. In one province of China, brides are supposed to spend an hour a day crying in the months leading up to the nuptials day. However, in another, couples have to slaughter a chicken to find out the perfect wedding date. And in some regions there couples are not allowed to attend another wedding, a funeral, or to visit a woman who’s just delivered the baby in the three months before their big day in order to avoid a clash of good fortune.

18. According to South African wedding traditions, the bride’s parents along with the groom carry a fire from their own hearths to the newlywed couple’s hearths and light it.

19. According to old tradition, a knife should not be given as a gift on a wedding as it signifies a broken relationship and bad luck. If somehow knives are on your registry, in that case you can give the gift giver a penny or a small amount. And then it will become a purchase, not a gift.

20. This one is from Medieval Europe, in order to avoid bringing in any evil spirits, the groom used to carry the bride into their new home. As, it was believed that a bride was extra vulnerable to evil spirits, especially through the soles of her feet.

21. In some cultures, it is supposed to be good luck for the bride to cry on her wedding day. As, it simply states that the bride has shed all her tears and do not have any to shed during her marriage. So brides don’t mind crying, apply waterproof make-up and get teary ☺ ☺

22. In the Hindu wedding tradition, the color of the henna or Mehndi that the bride applies on her hands depicts how much or not her future mother-in-law and husband will love her. It is believed that the darker the color of the henna, the stronger will be the bond of love and affection between the daughter-in-law and mother –in- law, and the couple, and the lighter the color, the lesser the bond!!

23. In most of the cultures the brides stand on the left of the groom, because in the olden days, the groom had to win his bride, and for that he needed his right hand free to fight the other swain in line.

24. According to English traditions, for a blissful married life Wednesday is the ideal day to get married.

25. Brides in Mexico aren’t all dressed in white. Many brides sew three colorful ribbons to their undergarments. These three colors are yellow, blue, and red. A yellow ribbon symbolizes the blessing of food, blue represents financial luck, and red is meant to have a passionate relationship.

26. In Scotland, brides before getting dressed in white, must first be drenched in slime. Pre-nuptials, the bride’s friends and her groom slather on her all the smelly foods such as, curdled milk, rotten eggs, and fish sauces. The tradition is meant to prepare couples for the hardships of married life. Also, it is done to avoid evil spirits.

27. In India, brides and grooms are bathed with turmeric and curd based ubtan on the day of their wedding. The tradition is said to be done in order to have clear and glowing skin and to purify themselves.

28. In Morocco, brides take a bath with milk to purify themselves.

29. In Poland, brides are supposed to pay close attention to their footwear. According to the tradition in Poland, if the bride wears open-toed heels on her wedding their future wealth and fortune would fly right through the opening.

30. In Egypt, for an entire week after the wedding, the newlyweds are given their time to relax and do whatever they wish to do, and the family of the bride does all the cooking.

31. In North Indian weddings, brides are not allowed to choose or see their own chooda (a set of bangles meant for the bride) until they get dressed in their bridal outfits. Seeing her chooda before her wedding is considered to be a bad omen for the bride and her new beginning.

32. In North India, Punjabi brides are supposed to wear their wedding chooda for at least a forty-five days to a year after their wedding.

34. In some cultures, pearls are considered as a symbol of wealth and love, but in Nicaraguan brides are not allowed to touch them. According to the Latin cultures, pearls stands for “tears of the sea” and wearing them on your wedding day is bad as it is the sign of sadness that is likely to show up in your married life as well.

35. In Kenya, the Maasai people drench newlyweds with good fortune. The father of the bride here spits on her head and chest while she leaves the village with her new husband. The act simply means, by acting disrespectfully, rather than heaping the couple with praise, they avoid alluring fate and bringing bad luck to the newlywed couple.

36. As part of their pre-wedding celebrations, Indian brides apply henna to their hands and feet in a pre-wedding ceremony called Mehndi. More often than not, the groom’s initial or the name is included in the elaborate henna designs. If the groom is able to locate his name or initials on the wedding night, the couple is thought to have good luck.

37. Like Indian brides, brides in the Middle East apply henna on their hands and feet in order to keep the evil eye away from them.

38. In Holland, a Pine tree is planted outside the house of the newlywed couple in order to bring them luck and also planting of Pine tree symbolizes fertility.

39. This is really amazing. Brides in Sweden according to the traditions, take a silver coin from her father and a gold coin from her mother and place them in her shoes. The tradition states that the bride will never be without money ever.

40. In France, there is a unique tradition of keeping the bad luck away and the tradition is called La Soupe. According to the tradition the wedding guests will gather the leftovers from the reception, or some tasty treats like champagne and chocolates—and place them into a toilet or toilet-like bowl for the bride and groom to eat. Well… No words ☺ ☺

41. Well, this is one-of-its-kind wedding tradition, where to have good luck by their side after the wedding, couples let a cat eat some food from their shoe (the best would be the left shoe).

42. According to some wedding superstition, if a single unmarried women sleep with a slice of a wedding cake (of course from a wedding they attended) they can dream of their future husband.

43. Well, in almost all the cultures wedding gifts are given by wedding guests only. But in the Finnish tradition, the bride personally goes door to door in order to collect her wedding gifts that too in a pillowcase and she is accompanied by an older married man. The tradition simply signifies a long-lasting married life.

45. Well, the very famous trend of cutting the wedding cake on the wedding has come from Rome. In olden days wedding guests would place a loaf of bread on the bride’s head and break it in order to ensure fertility.

46. In most of the western countries, June weddings are very popular. And the reason behind June weddings is – The Roman goddess Juno, who is considered to rule over marriage, childbirth and the hearth.

47. Most of the weddings in Indian system happens in Brahma Muhurta as it is considered the best time to do any ceremonial act or to get hitched.

48. In Irish weddings, bells are traditionally chimed to keep evil spirits away and to ensure a harmonious married life.

50. According to Irish traditions, ringing bells symbolizes good luck and hence, Irish brides carry small bells in their bouquets as a reminder of their sacred wedding vows after the wedding. Ringing bells are a common gift for newlyweds here.

However, superstitions are now sloping down in almost every culture, religion and country in the world. Now it is absolutely up to the couples whether they want to follow them or not. But if you feel that doing or not doing a particular thing or ritual will ensure a happy marriage and fertility, then you are absolutely free to follow these rituals. The idea is to have a happy married life, and this is up to you absolutely. If you feel following them do them, if not then simply chuck them…