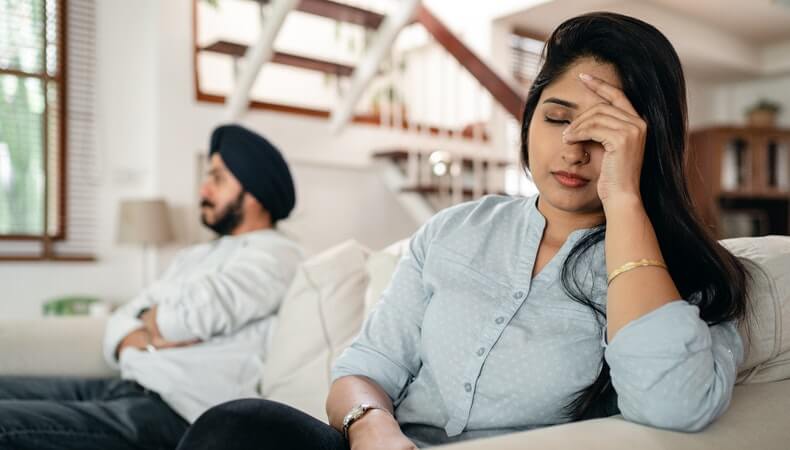 Married life is just like a seesaw; things can change at any moment. Married couples have to face several common problems. Some of them can be avoided, fixed, or resolved, while others take terrible shape. Here we are sharing the 23 most common marriage problems faced by most married couples. Take a look at them and know how to tackle these problems before they cause irreparable damage in your married life.

This is the most common marriage problem that can rot a marriage from the inside, leaving it beyond repair. Trust is the essential element required to maintain a healthy relationship. Know that it takes time to build trust. And if you have the nature of doubting your partner, you need to bring about some major changes in your behavior before it causes irreparable damage.

Money minded behavior is another common problem with a married couple. If any of you is more into money, then definitely your marriage has problems. For instance, both of you are earning, and the one who is earning more tend to insult the other partner. This kind of behavior creates a void in the relationship, and eventually, it falls apart.

The best way to avoid this is not to bring in the money matter into your relationship. How much you earn is secondary; primary remains the respect that you have for your partner.

Also See: 19 Things That Can Destroy Your Relationships

Adultery or infidelity is one of the most common marriage problems. It includes cheating and having an affair outside your marriage. Besides, one-night stands, physical intimacy with other people outside marriage, internet relationships, etc. is also the case of infidelity. Usually, one of the two partners gets into it if there is no love and understanding between them. Or if there are regular fights and issues between the two. They get attracted to other people quickly in such circumstances.

Believe it or not, physical intimacy is indispensable for a healthy relationship. More often than not, couples have problems because of sexual differences. Sexual problems can occur in a relationship for many reasons, such as loss of libido. Most women experience issues with libido after childbirth. Gradually they lose interest in physical intimacy that causes problems in the relationship. Sometimes sexual problems occur due to the sexual preferences of a spouse. When one person in the relationship prefers different sexual things while the other partner doesn’t like them, it makes the other spouse agitated and uncomfortable.

5. Differences in values and belief systems

Stress is one of the most common marriage problems. Stress in a relationship can be caused by several different reasons, such as family, professional, financial, clinical issues, and

mental issues. Financial problems can originate if a spouse loses his/her job. Stress from family can come because of children, or extended family members, so on and so forth. The best way to avoid this is to learn how to handle stress and be mindful.

Clinging behavior is another common marriage problem. Some partners tend to cling on to their spouse. This causes irritation in a spouse, and gradually differences in the relationship start to appear. Every relationship needs breathing space to thrive and flourish. When a person becomes clingy, other partners find it difficult to even breathe in the relationship. This breathlessness becomes a problem between the two. Space in the relationship is A MUST!

A lot of traumatic events that occur in life can be life-changing. When couples go through traumatic incidences, it simply makes a relationship more complicated. These traumatic situations become problems, especially when one spouse does not know how to tackle the situation. For instance, a spouse lost his job due to uncertain market conditions. He/she became depressed and overly dependent on his/her spouse. Anyone can support you for a brief time, but to handle things round-the-clock needs lots of patience, which most people lack today. And this gradually creates huge problems in their relationship.

Jealousy is another common marriage problem that can cause a marriage to rot. It’s challenging to be with an overly jealous partner. Jealousy is okay to a certain limit. But extreme levels of jealousy cause severe damages. For instance, a spouse tends to check another spouse’s phones, ask questions about every call, and every message that the spouse shares becomes problematic. It puts a lot of strain on the relationship; eventually, it damages everything.

Financial issues can damage any relationship faster than any other reason. A couple is bound to encounter financial problems in their marriage. Hence, it becomes essential to discuss financial issues together as a couple openly.

If any of the partners tend to lie, it is highly likely that the marriage won’t work. Lying is a common marriage problem that can damage a marriage ultimately.

If there is a huge age gap between the two, there are chances that the couple would face problems. Whether it is an older man and a younger woman or older woman and younger man, problems are likely to happen. Moreover, nothing remains the same; people change with time, and couples might not stay as compatible as they used to be.

16. Attempting to change each other

When you love someone, you have to accept the person with his/her flaws. However, some people don’t understand this; instead, they attempt to change each other as per their convenience. And this is very common amongst couples. Know that the more you will try to change a person, the more he/she will revolt.

18. Spending too much time on technology and social media

Technology has turned out to be both boon and bane for the human race. Technology has made things easier, and social media has helped people connect with others in real-time. But, sometimes, the same technology becomes a problem. More often than not, it is seen that people spend more time on social media than with each other. It leads to a void in a relationship. Also, these platforms breed unrealistic expectations in a spouse who uses social media more. Of course, when you see your friend visiting Europe, you also want to go there and set unrealistic expectations. It is essential to understand that the virtual world is not the real world.

Being selfish in a relationship is not a good sign. However, a little bit of selfishness is not a problem, but not considering the other partner is terrible. It can damage the relationship beyond recovery.

Every person wants to be acknowledged for his/her efforts. But if you lack appreciation, then it becomes a problem. Your inability to appreciate your partner can lead to severe problems.

21. Being Disrespectful Towards Each other

Respect is imperative irrespective of a person’s status, financial condition, relation, etc. In a marriage, you must be respectful of each other. Everybody deserves equal respect. The disrespectful behavior of a spouse leads to severe damage.

If you two don’t understand each other, then forget to have a successful marriage. Understanding is significant for the success of your marriage. Lack of understanding creates unnecessary chaos; eventually, marriages fall apart due to this.

Last but not least, extreme differences in behavior is one of the most common marriage problems. Many problems occur due to the difference in behavior, such as ego problems. If there is an ego between the two, you can never reach a solution.

These are the 23 most common marriage problems that most couples face. However, all these problems are workable and can be fixed. If you are struggling with any of these problems, it’s better to introspect and fix them. All you have to do is to be mindful!