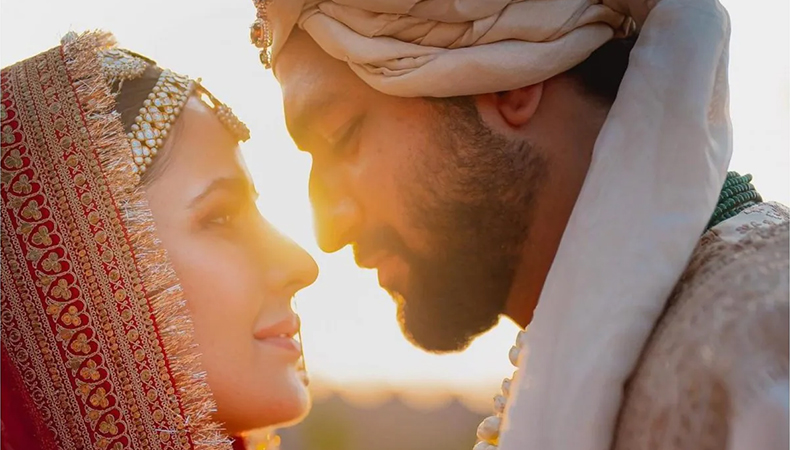 The most anticipated wedding in Bollywood took place yesterday, on December 9, 2021. Yes, we are very much talking about the wedding of Phantom actress Katrina Kaif and Uri actor Vicky Kaushal. The two had been dating since 2019, and their wedding was the most anticipated in the industry since Dipika Padukone and Priyanka Chopra’s. 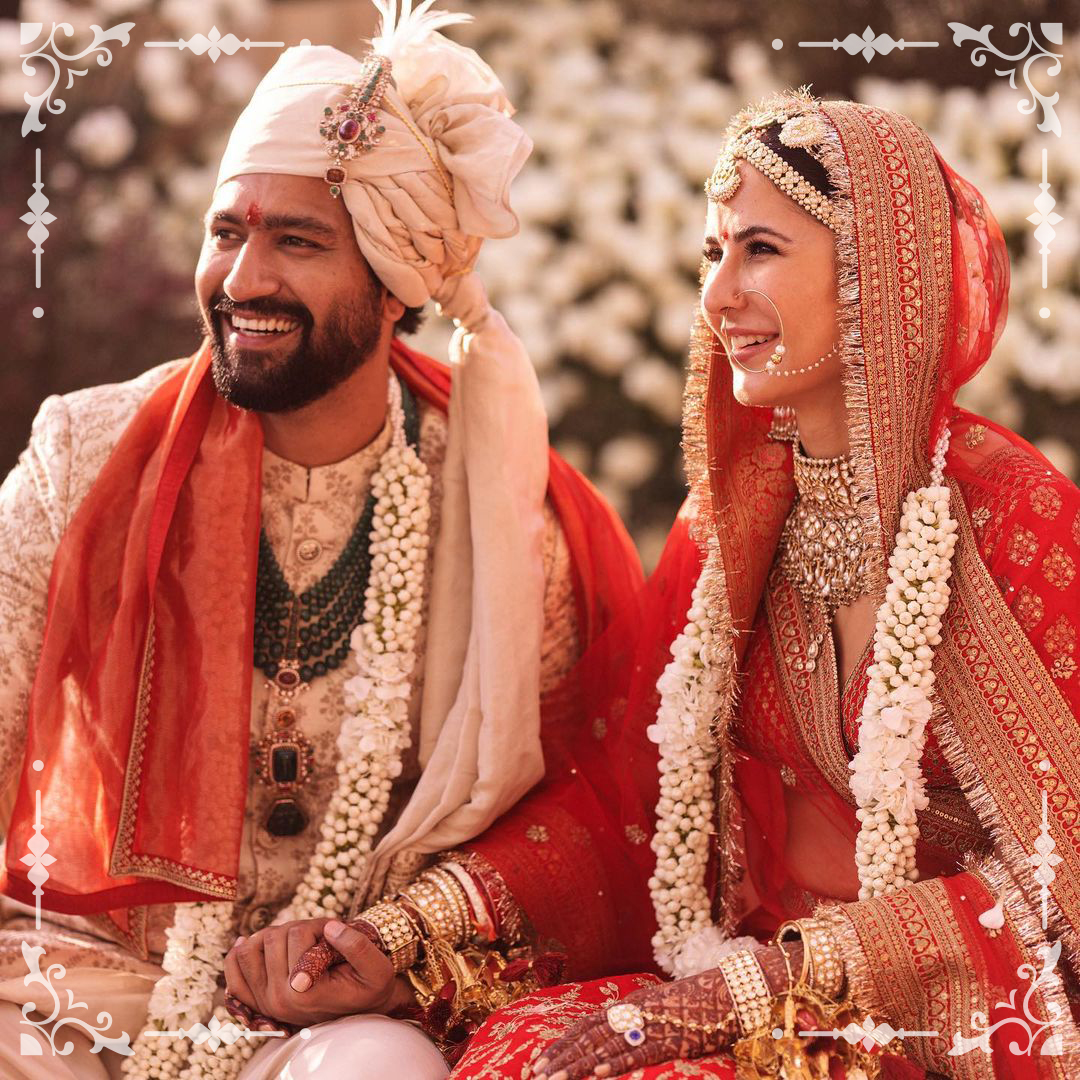 After weeks of pure conjecture, Katrina Kaif and Vicky Kaushal got married. On Thursday, the couple announced their wedding on social media. They got married in the picturesque city of Sawai Madhopur, Rajasthan. The couple married in a traditional Punjabi wedding ceremony at the Six Senses Fort Barwara Hotel with just their family members and close friends.

The celebrity couple and their closest family and friends gathered at the Six Senses Fort Barwara Hotel, Sawai Madhopur, Rajasthan, for a three-day wedding celebration, which began on December 7 (Tuesday).

Vicky Kaushal and Katrina Kaif dated for about two years before marrying on December 9, 2021. The couple kept their relationship under wraps. They have, however, been seen together at parties and industry events on several occasions. They even visited each other’s homes before they departed for Rajasthan.

According to reports, the couple married in two ceremonies in order to honor both of their traditions. On December 9, the couple’s Punjabi-style wedding began around noon. Vicky and Katrina performed pheras at the muhurat time, which was between 3.30 pm to 3.45 pm.

Katrina and Vicky took to their social media handles and shared their official wedding photos as newlyweds on their respective social media accounts shortly after the wedding rituals were completed.

The couple captioned the photos, “Only love and gratitude in our hearts for everything that brought us to this moment. As we embark on this new adventure together, I ask for all of your love and blessings.”

Following their wedding, the newlywed couple served sweets and other delicacies to the journalists and paparazzi stationed outside Six Senses Fort Barwara. 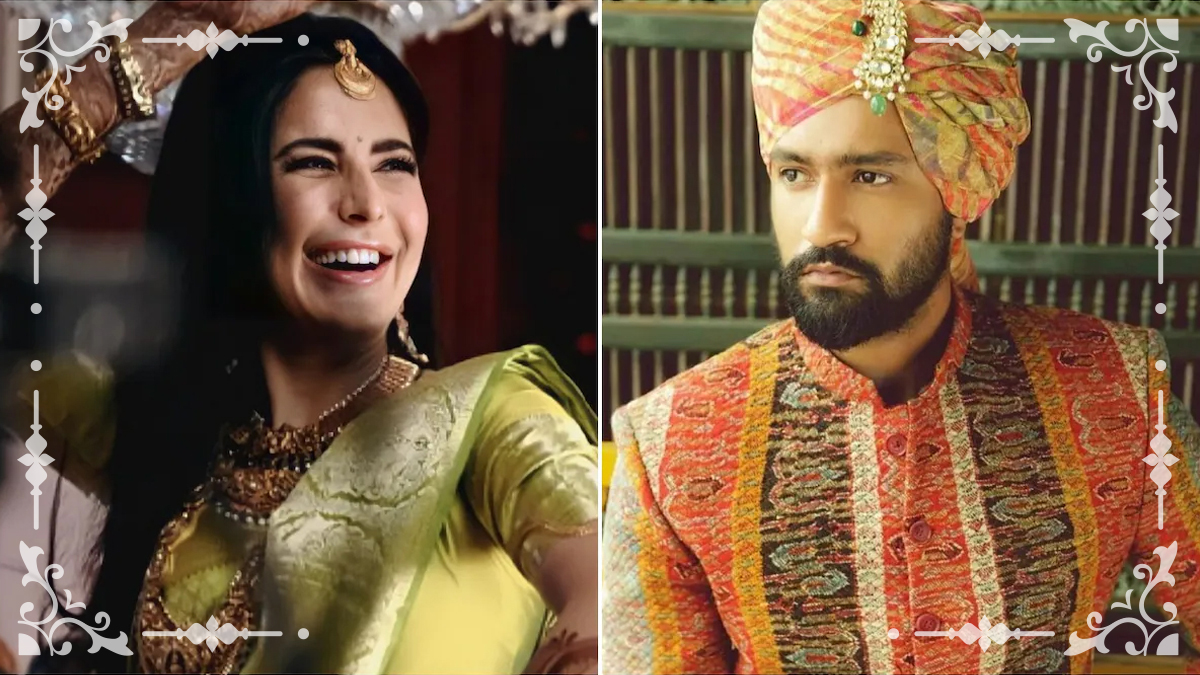 The couple’s pre-wedding festivities officially began on December 7. Katrina Kaif and Vicky Kaushal are said to have paired up in floral outfits for their sangeet. On Wednesday, Katrina Kaif and Vicky Kaushal partied with their friends and family at Fort Barwara. According to reports, Katrina wore a pink lehenga for the Sangeet ceremony, while Vicky matched her look with a floral sherwani.

Many Bollywood celebrities, including Kabir Khan, Mini Mathur, Angad Bedi, Neha Dhupia, Sharvari Wagh, Radhika Madan, and Malavika Mohanan, attended the much-hyped wedding. Attendees were reportedly asked not to use their phones during the ceremonies.

For their sangeet cake, the couple spent a whopping Rs 4.5 lakh. It was a five-tiered cake, for which the couple specially hired a Delhi-based pâtissier. 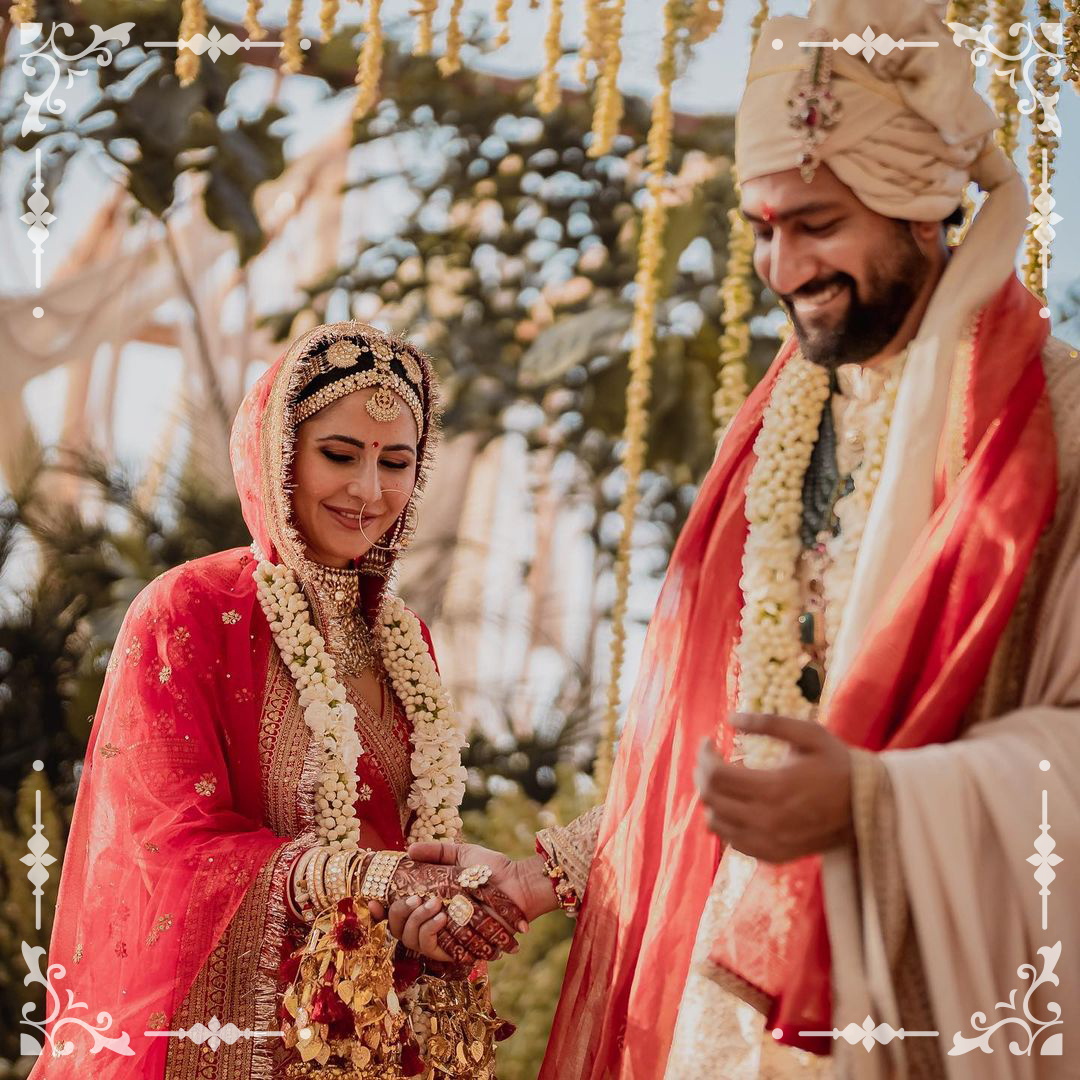 Katrina and Vicky tied the knot in a breathtaking location, “Six Senses Fort Barwara Hotel,” situated in Sawai Madhopur, Rajasthan. The entire venue was decorated with flowers in keeping with the floral theme.

The newlyweds planned to enjoy their honeymoon at Six Senses Fort Barwara. There had been reports that the couple was flying to the Maldives for their honeymoon. However, a source close to them repudiated these rumors.

Congratulatory wishes and messages have been gushing in from across the world for the newlywed couple. Celebs such as Priyanka Chopra Jonas, Alia Bhatt, Kareena Kapoor Khan, Deepika Padukone, Karan Johar, Tiger Shroff were among the first to send their best wishes to the couple.

Alia liked VicKat’s wedding pictures when the couple posted them on their respective social media handles. She wrote, “Oh my god, you guys look so, so, so beautiful,” accompanied by a series of red heart emojis.

Karan Johar wished the couple and wrote, “Congratulations to this gorgeous couple! @katrinakaif and @vickykaushal09 ! Wish you both decades of abundant joy and eternal happiness…. All my love and best energies are coming your way.”

Kareena Kapoor Khan commented, “You did it!!! God bless you both!” While Priyanka commented, “So happy for you! Mere yaar ki shaadi hai! Congratulations both of you! You’re perfect together!” On the other hand, Deepika Padukone wished Katrina and Vicky “a lifetime of love, laughter, loyalty, respect, and companionship.”

Tiger Shroff simply commented, “Congratulations.” While Katrina’s co-star Hrithik Roshan commented, “So amazing! Sending you both all my love!!! Have to dance together soon!” Director Abhishek Kapoor wrote, “Huge congratulations, Katrina and Vicky. God bless you both!” Parineeti Chopra wrote, “Katy- only love and more happiness to you!”

Actress Anushka Sharma (who will be Vicky and Katrina’s neighbor) took to her Instagram and shared a story with a message: “Congratulations to both of you beautiful people! Wishing you guys a lifetime of togetherness, love, and understanding. Also glad you are finally married so that now you can move into your house soon and we can stop hearing construction sounds.” 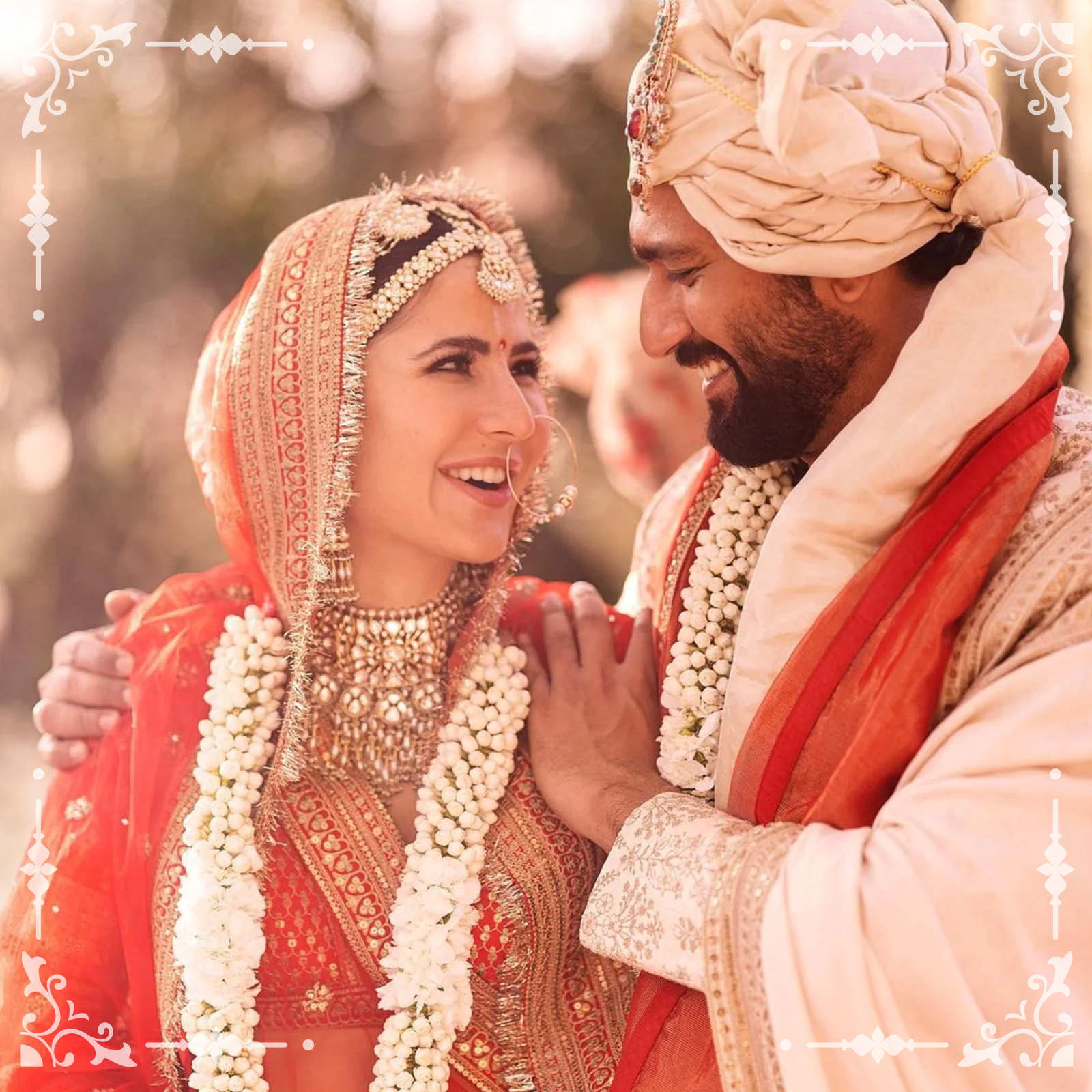 Earlier this year, the Masaan star moved out of his parent’s house (which is in Andheri). In July of this year, he and Kaif have rented in Juhu’s Rajmahal, an ultra-luxurious structure for Rs 8 lakhs per month. The apartment is on the 8th floor, and they will be neighbors with Anushka Sharma and Virat Kohli, who already have two floors in the same building.

The couple planned to settle in their new house after their wedding. Katrina Kaif is expected to perform her Graha Pravesh rituals in her new house next week. The two families will be present at the ceremony. The ceremony’s preparations are already underway in Mumbai.”

According to reports, Vicky Kaushal and Katrina Kaif have paid a substantial deposit for the apartment. Vicky has agreed to rent the apartment for five years, beginning in July 2021. He has paid a security deposit of nearly Rs 1.75 crore. The monthly rent for the first 36 months is Rs 8 lakh. They will be paying Rs 8.40 lakh per month for the next 12 months and Rs 8.82 lakh per month for the remainder 12 months. 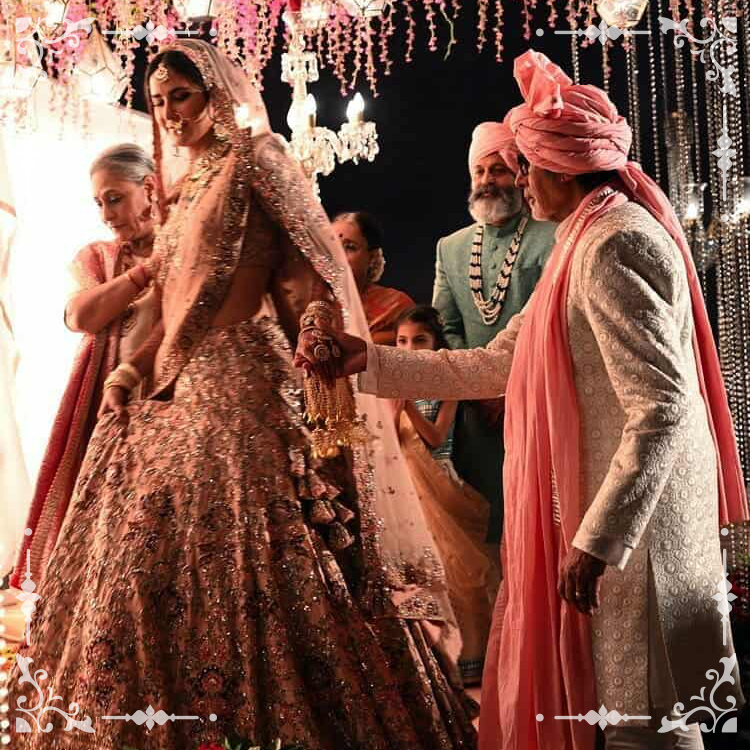 There is a report that the couple has sold the VicKat Shaadi rights to Amazon Prime Videos (an OTT giant) for Rs. 80 Crores. The wedding is expected to be streamed on Prime Videos as part of a special package next year. 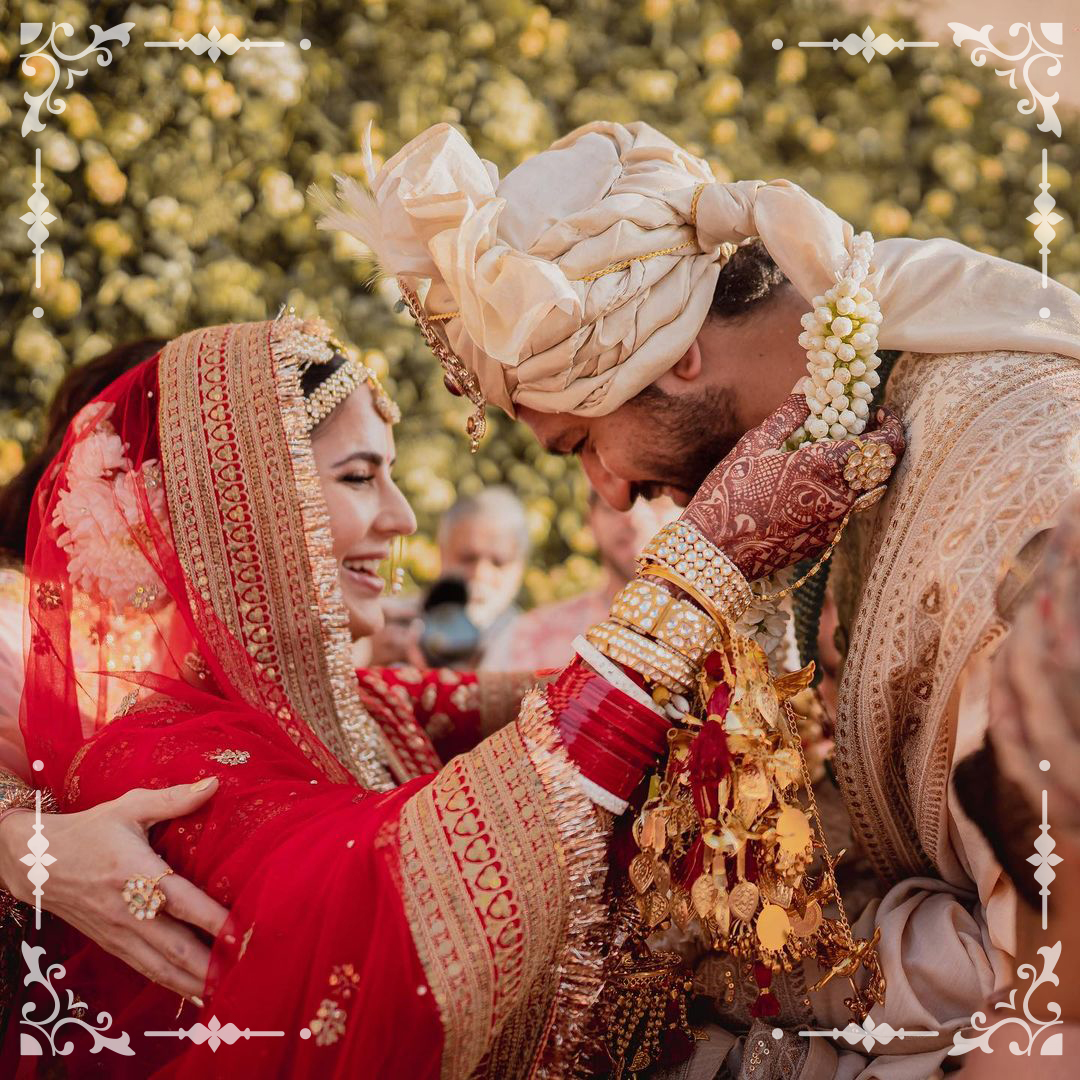 We Wish Vicky & Katrina A Lifetime Of Love And Happiness… Many Congratulations!