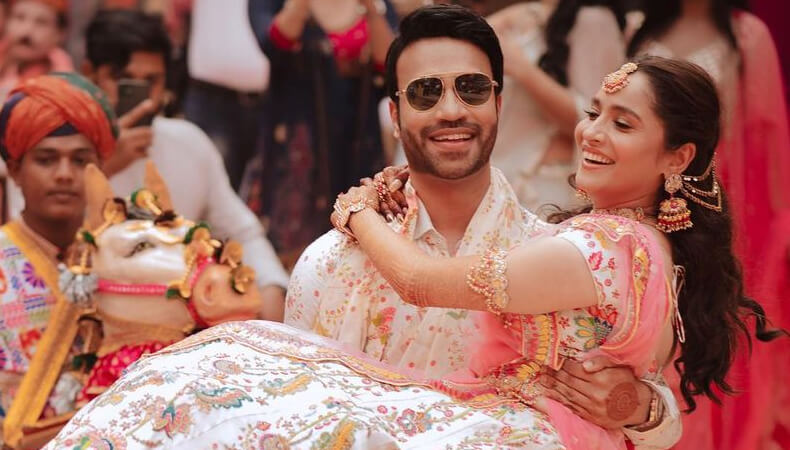 A week ago, we had just witnessed the hugest wedding of the year, that of Katrina Kaif and Vicky Kaushal. The couple tied the knot in an intimate ceremony in Rajasthan. Another wedding that of Ankita Lokhande and Vicky Jain is on the horizon. The wedding will take place today, December 14.

The pre-wedding festivities began on Sunday (December 12) with the Mehendi ceremony. The couple had their Mehendi ceremony on Sunday afternoon, which was followed by an engagement ceremony in the evening. Videos and photos of them are already trending on social media. The actress was dressed in pink kurta and sharara, while the groom wore a grey silk kurta.

Sana Makbul took to her Instagram handle and shared some of the pictures from the event. The actress posted a photo with celebrity Mehandi artist Veena as well as a video of herself dancing with the groom.

Veena also shared some of the ceremony’s other amusements. The bride-to-be can be seen beaming with joy and sharing a charming smile throughout her ceremony.

In one more post shared by Veena, Ankita can be seen wearing a traditional Maharashtrian saree. 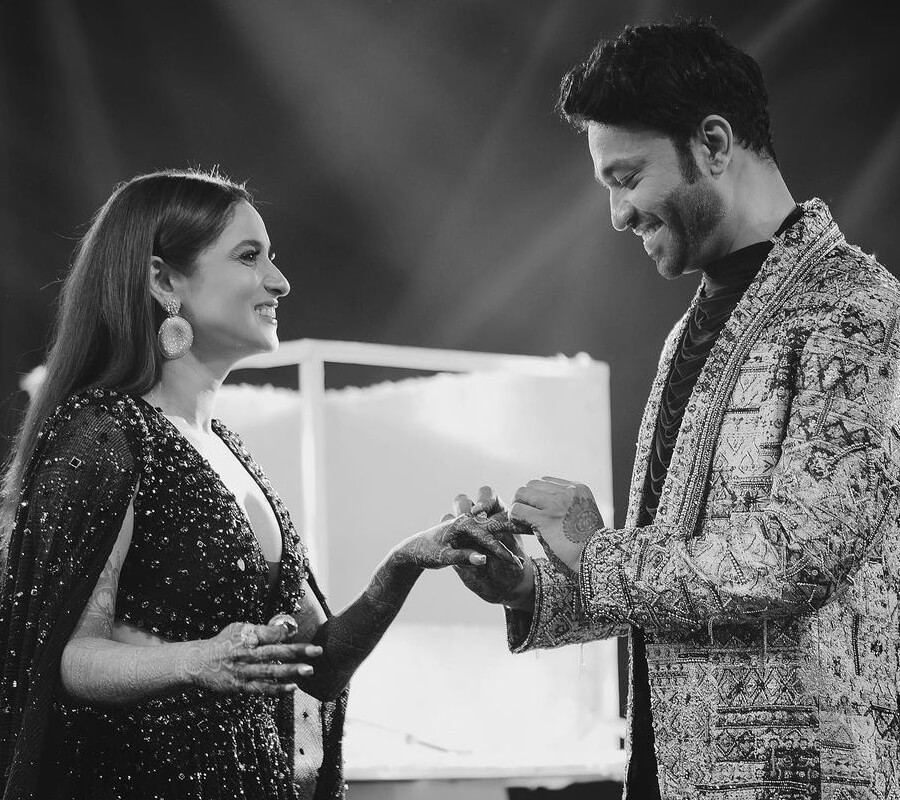 Ankita and Vicky exchanged rings on Sunday (December 12) in an intimate ceremony with close friends and family members in attendance. The couple wore black and silver outfits for their engagement ceremony and looked splendid.

While Ankita and Vicky did not share any photos or videos from their engagement ceremony, many videos and photos from the event have gone viral. Vicky can be seen grooving in front of his would-be wife Ankita, who appears to be enjoying the moment.

The actress can be seen having a great time with fiancé Vicky Jain at her Mehendi ceremony. The actress shared photos from the event, in which Vicky is seen carrying her in one photo and dancing with the groom-to-be in another. “The love we share makes my mehndi look so beautiful, meaningful, and memorable @jainvick (sic),” Ankita wrote in the caption.

Their Haldi and Sangeet took place on Monday (December 13). 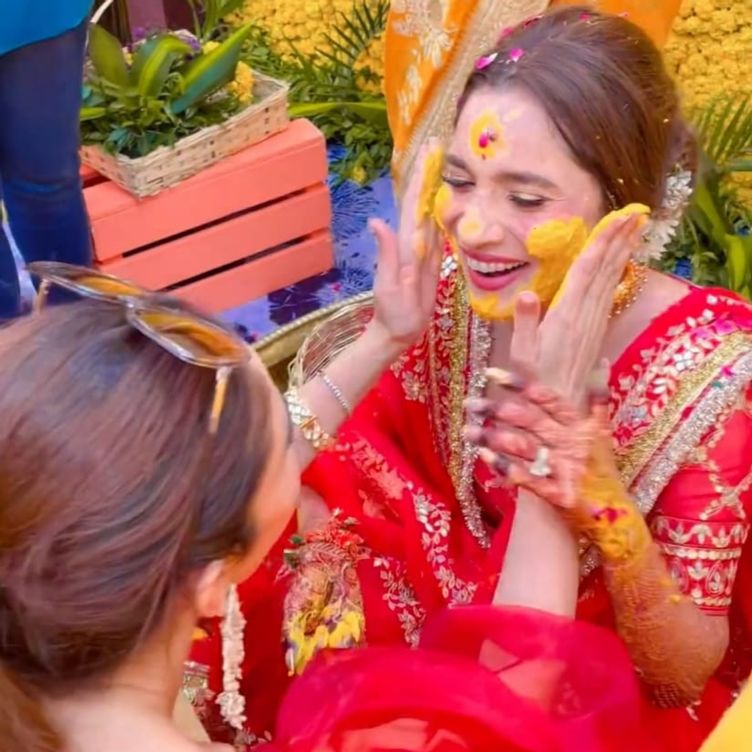 According to reports, the wedding will take place at the Grand Hyatt hotel in Mumbai. Their wedding is going to be an intimate celebration that will be attended by close friends and family members. “Bhagat Singh Koshyari ji ” Governor of Maharashtra is also expected to be attending the wedding. Recently the couple met Koshyari ji at his office to invite him to the wedding. Both Ankita and Vicky went to the Governor’s office to hand out the invitations, and while there, they took a few photos to give fans a sneak peek of their meeting. 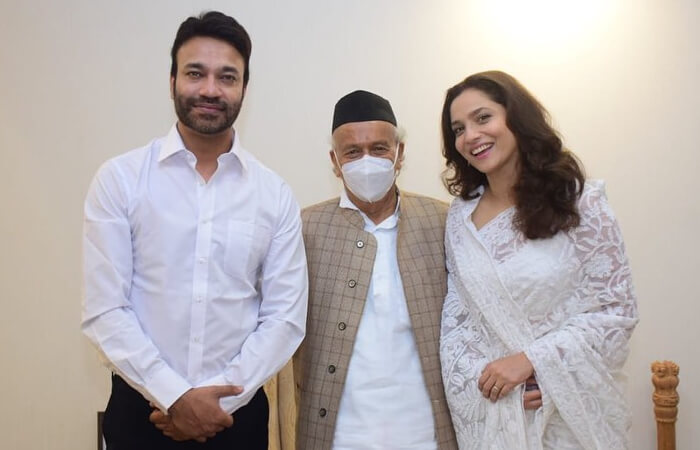 Ankita even took to her Instagram to share a picture of her and Vicky extending the invitation to Koshyari ji. Ankita captioned the photo, “I would like to express my gratitude for the opportunity to meet with Honorable “Bhagat Singh Koshyari ji” Governor of Maharashtra.” I know you’re very busy, sir, and I appreciate you taking the time to speak with us at Raj Bhavan @bhagatsinghkoshyari.”

Ankita’s co-stars and friends, including Prarthana Behere, Amruta Khanvilkar, Mahhi Vij, Minal Mogam, were some of the attendees in the star-studded wedding celebration. 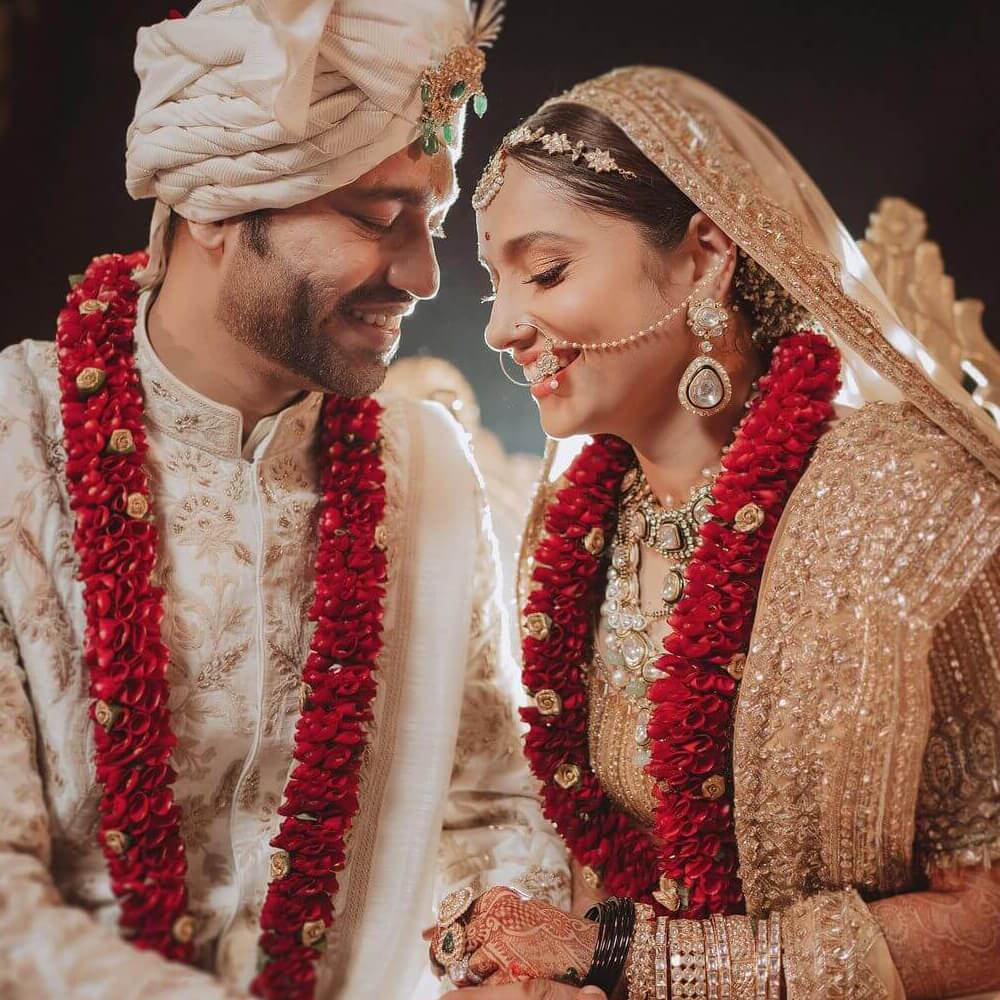 On December 14, after two days of pre-wedding celebrations in Mumbai, Pavitra Rishta star married her fiancé Vicky Jain. However, due to the Covid-19 situation in Mumbai, the big fat wedding that was planned for Ankita Lokhande and Vicky Jain’s wedding was canceled.

It was an intimate celebration with a small gathering attended only by close family and a few friends. Ankita’s pre-wedding festivities began with her Mehendi ceremony on Saturday, which was followed by an engagement, sangeet, cocktail, and Haldi ceremony. 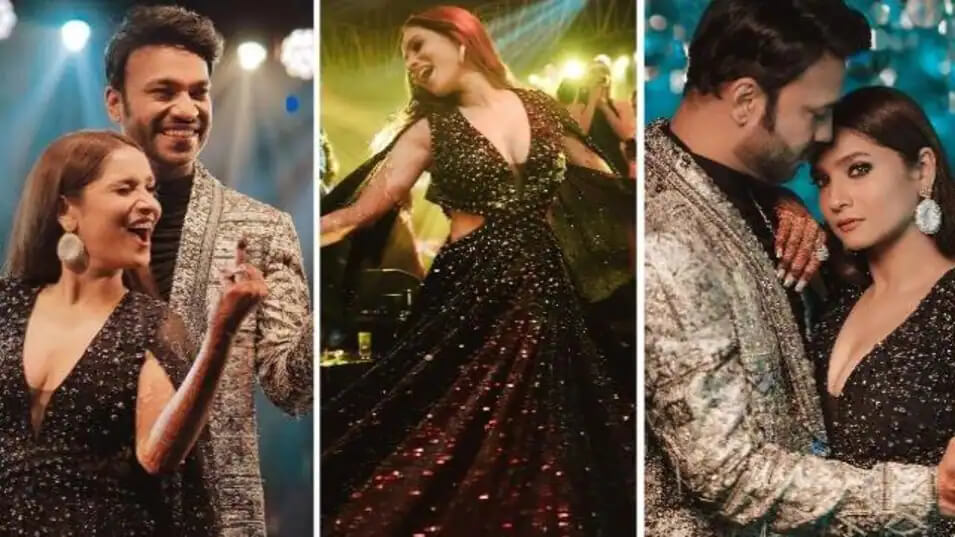 Finally, the two became one and are now all set to embark on the new journey of their lives. Ankita Lokhande looked stunning in her heavily embroidered golden lehenga with a beautiful sheer veil designed by Manish Malhotra. And the groom donned white sherwani with silver embellishments on it.

Their friends and close relatives shared several pictures and videos of Ankita and Vicky having a good time at their lavish ceremonies.

Many TV actors and Bollywood celebrities, including Kangana Ranaut, Amruta Khanvilkar, Mahhi Vij, and others, attended the wedding and shared pictures of the celebration with their fans.

Kangana Ranaut, who co-starred with Ankita in the 2019 film Manikarnika, attended her cocktail party on Monday and shared photos on Instagram.

Minal Mogam posted a video of Ankita Lokhande’s wedding highlights and wrote, “My child has married! ❤️❤️🧿🧿 It was a very emotional day for all of us… Finally, after years of waiting and planning, today was the day my anku became Mrs. I can’t express how happy I am for you. Congratulations, Mrs. Jain! I wish you all the joy and love in the world! @lokhandeankita.”

Prarthana Behere shared an earnest post for co-star and newlywed Ankita Lokhande. She wrote: “Congratulations on your special day wede … @lokhandeankita wishing you all the good things that togetherness brings in to life !!!!! Love you forever ❤️❤️” 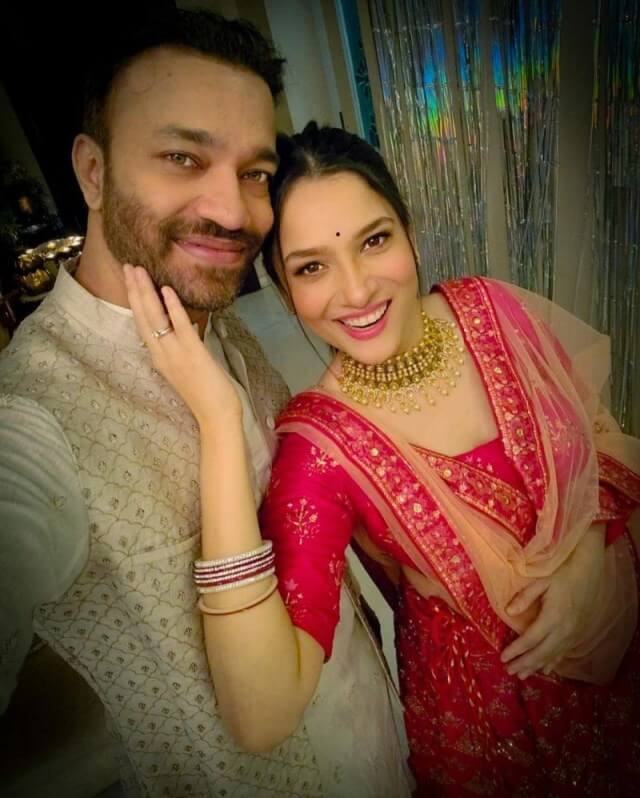 Ankita Lokhande and Vicky Jain began dating each other three years back, and since then, they have been making significant appearances. They have been getting media attention since their wedding rumors began. However, the couple confirmed their wedding by posting the wedding invitation on social media. The news came as a welcome relief to the actress’s fans, who had been hoping to see her as a bride.

The couple appears to be very happy together. The Pavitra Rishta star always praises beau for sticking by her side during her most difficult times and for always being there for her.

The couple also recently released a pre-wedding video in which they can be seen romancing in picturesque settings. The video begins with Vicky and Ankita strolling on a sand mountain, which appears to have been shot in Dubai. Vicky wore white pants and a matching shirt while the actress wore a white saree.

As the video unfolds, the couple poses on a yacht against a backdrop of the city’s skyscrapers. The video cuts back to the sands, where the couple is hugging as the sun sets in the background.

Teri Ore from Singh is Kinng and Suraj Hua Maddham from Kabhi Khushi Kabhie Gham are some of the top Bollywood songs featured in the video. 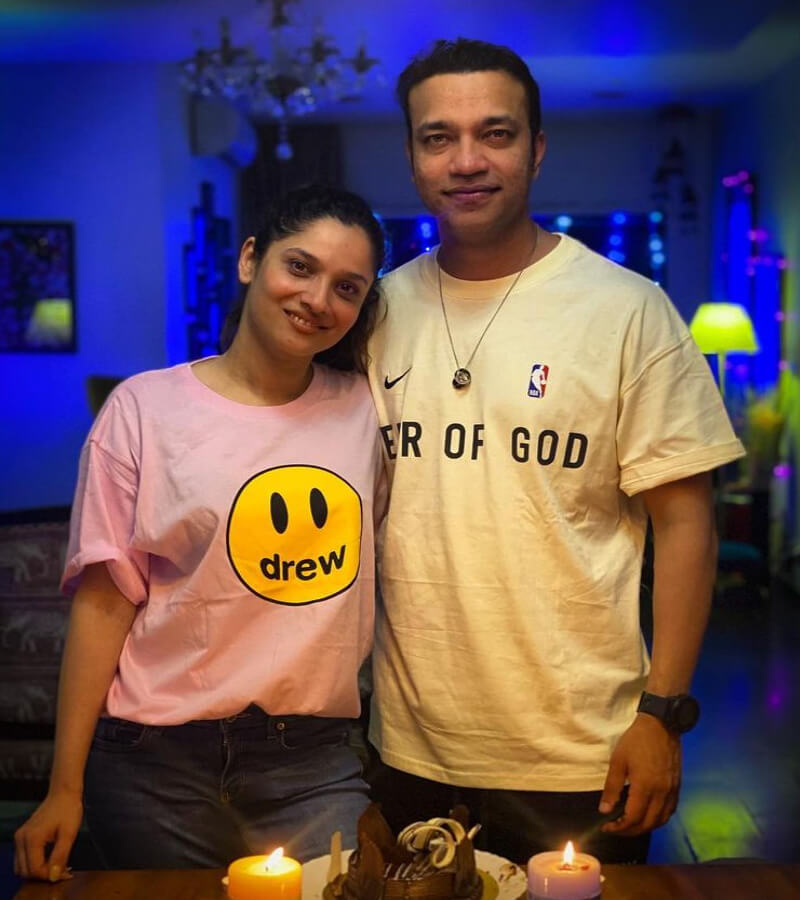 Ankita, who began her career with Zee’s Pavitra Rishta alongside Sushant Singh Rajput, has always been in the headlines. She was recently seen in Zee5’s Pavitra Rishta 2 with Shaheer Sheikh. Vicky Jain is a businessman from India. He comes from an upper-class industrialist family with origins in Chhattisgarh. In 2017, Vicky made headlines when a photo of him and Ankita Lokhande at a Holi celebration went viral on social media.

See the pictures from their BIG DAY! 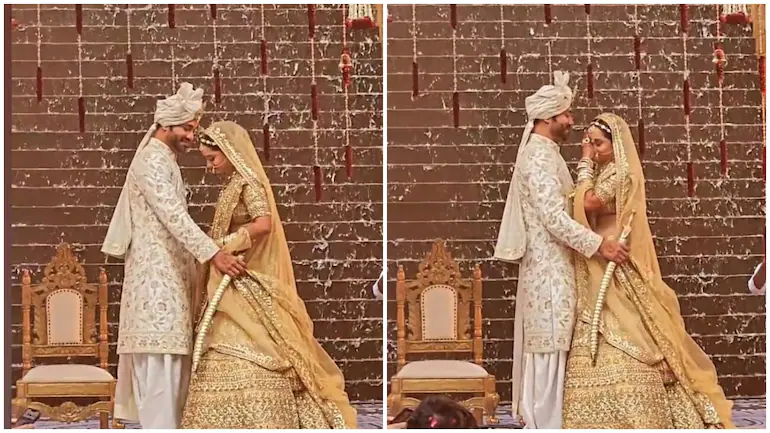 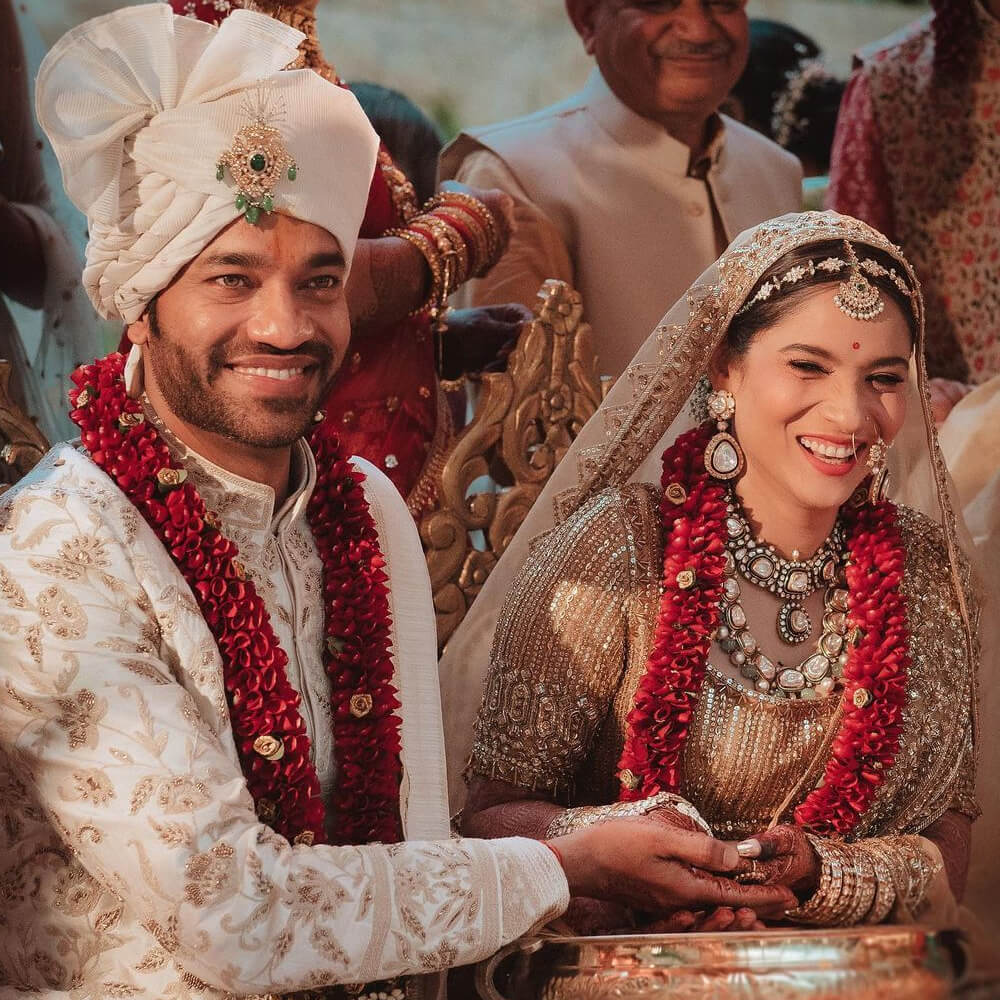 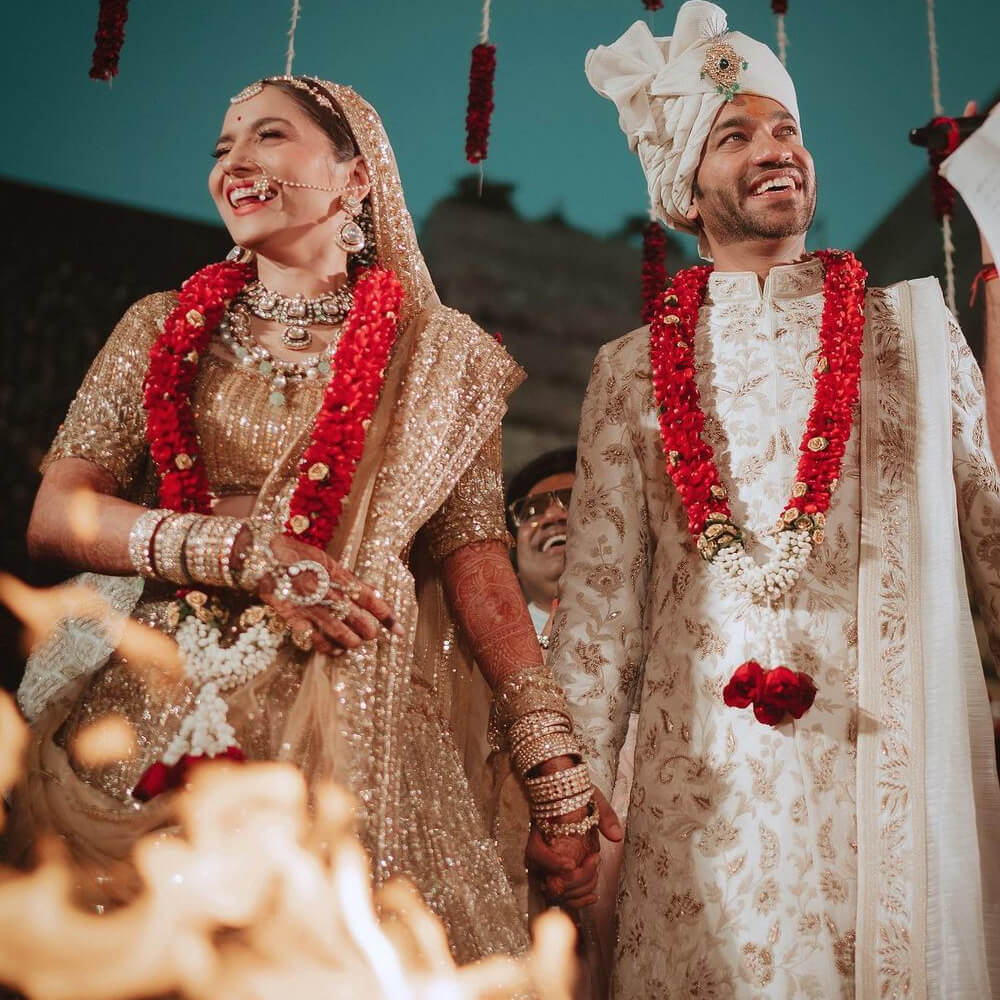 Well, we wish Vicky and Ankita a lifetime of happiness and togetherness.

We Wish The Couple A Very Happy Wedding… ☺ ☺