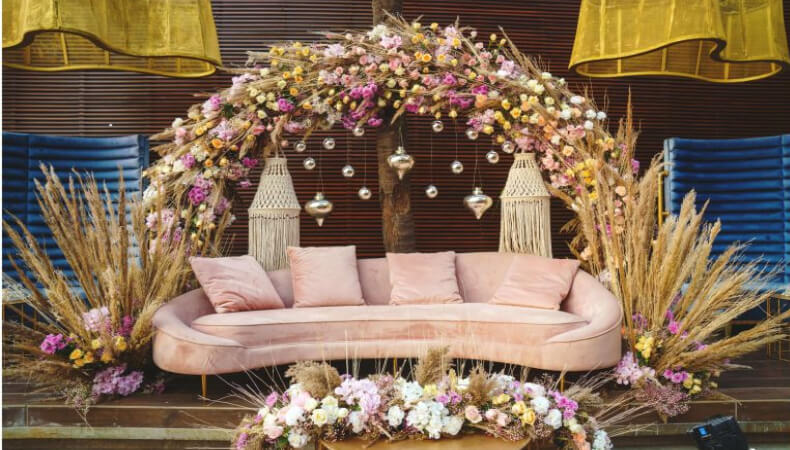 If you also want to know everything about the Roka ceremony, then don’t wait to scroll down.

The Roka ceremony is the first step towards marriage. It is one of the most significant pre-wedding ceremonies in Indian weddings. In an Indian system, the boy, along with his parents and other family members, first see the girl. If the girl and boy like each other and give their consent to get married to each other, then the girl’s family will give some money, sweets, and gifts to the boy; similarly, the boy’s family will give money, sweets, and gifts, like gold jewelry, etc., to the girl.

This is called Roka, which means to book the girl and the boy for marriage on a future date. More often than not, this ceremony takes place on a small scale. However, some people prefer to host it on a large scale.

On a large scale celebration, both the families invite their close relatives and friends. A Pandit is also arranged for performing pooja. Both the families gather at the venue; they exchange sweets, fruits, gifts, dry fruits, etc., with each other and bless the couple.

Pandit performs pooja according to the Indian rituals and traditions.

The Roka ceremony venue depends on the size of the event. If it is going to be a small-sized event, then the venue is the girl’s house. If the two families decide to celebrate Roka on a larger scale, they book a hotel or a banquet hall.

More often than not, Roka ceremonies are celebrated on a smaller scale. It is actually a way to announce that the girl has got her future husband.

Usually, the boy and the girl adorn traditional ethnic wear at their Roka ceremony. The girl can consider wearing a saree, lehenga, or salwar suit with little makeup. While the boy may consider wearing kurta pajama or a designer suit.

So far guests are concerned, they can also wear ethnic wears at the ceremony.

The proceedings of the Roka ceremony are very simple. The boy, along with his family and few relatives, reaches the girl’s place. Both the families gather, they make the girl and boy sit together. The first ritual that is performed is the Tilak ceremony. In Tilak Ceremony, tilak or a paste of vermilion and rice grains are applied on the boy and the girl’s foreheads.

The boy’s family gives gifts, dry fruits, a basket full of different varieties of fruits, cash, clothes, and sweets to the girl. The mother of the groom-to-be adorns the bride-to-be with a beautiful red dupatta and blesses her with a piece of jewelry, cash, etc. Similarly, the girl’s family gives gifts, cash, and sweets to the boy and blesses him. After this, all the elders present at the occasion bless both the girl and the boy.

Significance of the Roka Ceremony

Both the families later announce the good news to their relatives, friends, and neighborhood with sweets.

Roka ceremony is one of the most important pre-wedding ceremonies in Indian weddings. It marks the beginning of a new relationship between the couple and their respective families.

It plays a key role in the Indian system. After this ceremony, the boy and girl become officially eligible to meet in public and spend time with each other. This is one of the best ways to announce that the two have got engaged now!!