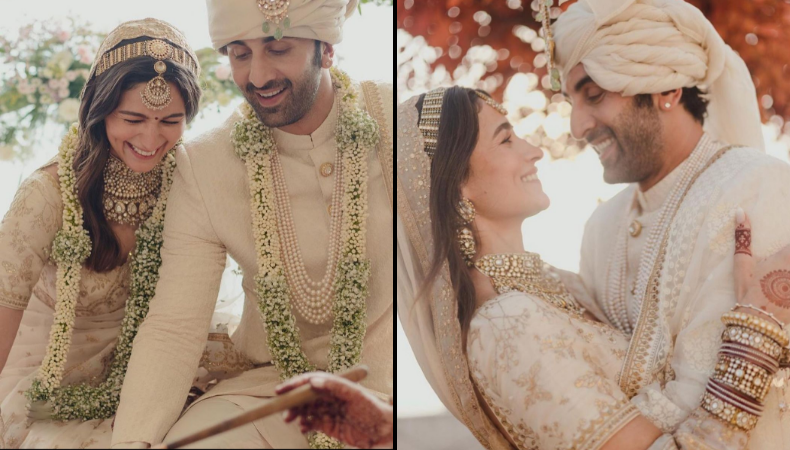 Finally, the most awaited wedding of B Town took place on Thursday, April 14, 2022. Yes, the most famous couple of Bollywood exchanged vows in an intimate ceremony in Mumbai. The wedding festivities began with the Ganesh Puja at the Ranbir Kapoor’s house, Vastu, which was followed by their Mehendi ceremony.

The Vastu building in Mumbai, where both Alia and Ranbir have individual apartments, served as the venue for the wedding of the Bollywood power couple. The couple’s close friends and family members attended the intimate wedding ceremony held in Mumbai on Thursday.

The wedding of Ranbir Kapoor and Alia Bhatt, which had been anticipated for a long time, finally took place on April 14, 2022. The wedding date was ultimately verified by the groom’s mother, veteran actress Neetu Kapoor, and her daughter, Riddhima Kapoor Sahni, while they were approached by the paparazzi on the job.

Ranbir’s and Alia’s social media was flooded with congratulatory messages from fellow stars and their fans following the highly anticipated wedding.

Inside photographs from the couple’s wedding ceremony have gone viral on the internet, in which they can be seen cutting their three-tier wedding cake and raising a toast following their traditional Punjabi wedding ceremony. After sealing the marriage, Ranbir Kapoor and Alia Bhatt raise a glass in celebration.

Insights from the Ranbir Alia Wedding

At the Varmala ceremony, Ranbir Kapoor kneels down in front of his ladylove Alia Bhatt. Viral Bhayani, a well-known celebrity photographer, posted the inside wedding footage on social media. Ranbir can be seen bending down for his ladylove in the most recent viral video from the varmala ceremony, as the two exchange garlands. 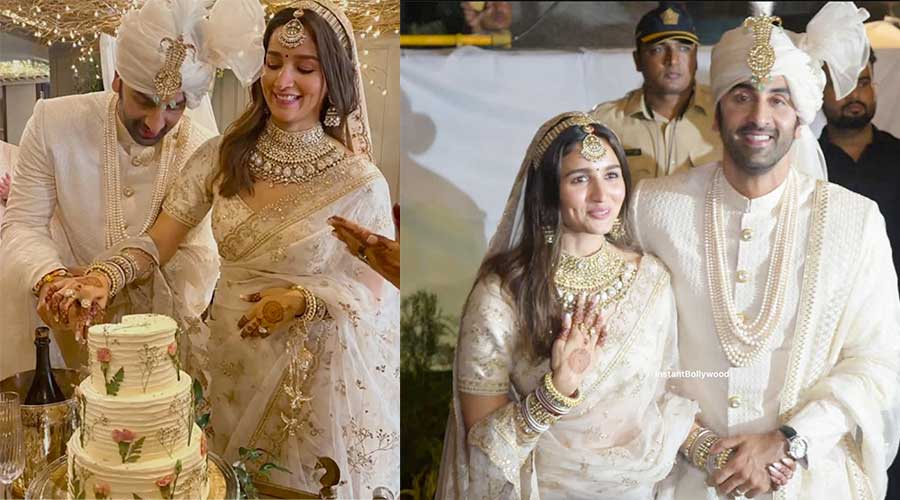 The bride and groom were dressed in ivory outfits from Sabyasachi Mukherjee’s line. The two even posed for photographers and waved to onlookers. Alia looked elegant and classy in her minimal bridal look. Ranbir Kapoor looked stunning in his ivory outfit. Throughout their wedding procession, the couple maintained a radiant smile. 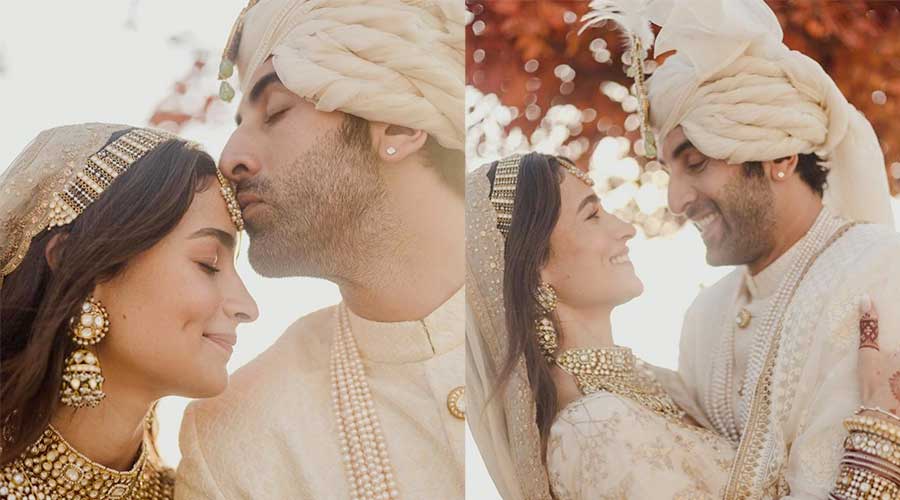 In an interview, Alia Bhatt’s brother Rahul Bhatt admitted that he was originally scared by the Kapoor name but later realized that they were the most genuine people he had ever met. He went on to say that the preparations were just excellent and that the food, which featured Kashmiri cuisine, was simply fantastic.

Kareena Kapoor Khan also took to her Instagram and uploaded a photo of her oldest son Taimur and Karisma’s son Kiaan from Alia Bhatt and Ranbir Kapoor’s wedding. Both of the lads could be seen standing innocently next to each other in the photograph.

“Da guys,” Kareena captioned the photograph alongside it.

Kareena also uploaded another photo of herself with Karan Johar on her social media accounts. The two of them looked really stunning in their ethnic attire for the wedding.

Ranbir’s sister Riddhima Kapoor Sahni also shared a romantic photo with her cousins Kareena Kapoor Khan, Karisma Kapoor, and Nitasha Nanda, all of whom were also in attendance at the celebrations. The Kapoor sisters struck a regal attitude in the photograph. Riddhima wrote: “Sister, #bhaikishaadi.”

Immediately after the wedding, Alia Bhatt changed the profile photo of her Instagram handle. She used a lovely shot from her wedding to Ranbir Kapoor as her profile picture. Alia and Ranbir appeared to be dressed in regal splendor in the photograph.

Mahesh Bhatt, Alia Bhatt’s father, took to his Instagram handle and shared a picture of his hands. The picture is of his henna design, which features Alia and Ranbir’s names inscribed on the palms of his hands.

“Written in the stars.. written on our father’s palms.. carved on hearts, for life and beyond,” Pooja wrote beside the photograph.

“#alia #ranbir #ranbiraliawedding” is the hashtag for this wedding. 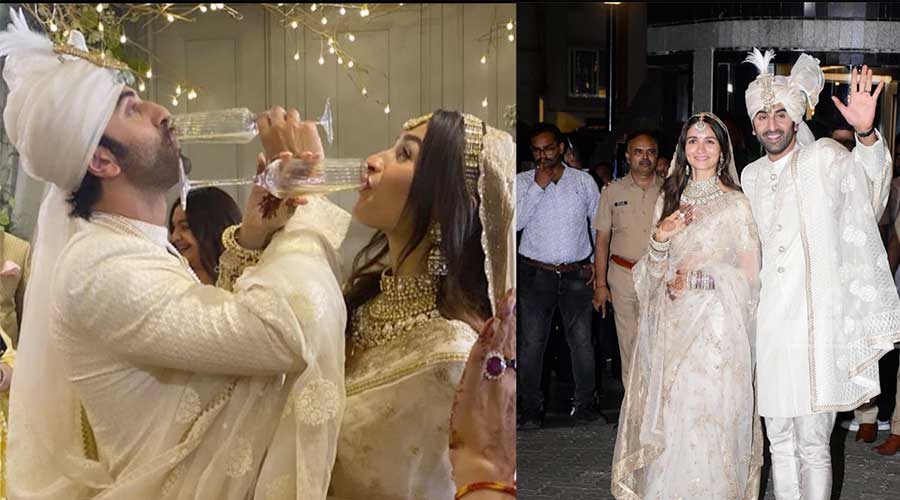 Alia’s half-sister, Pooja Bhatt, shared a photograph of the mandap and expressed her gratitude to Alia Bhatt and Ranbir Kapoor. The veteran actress shared two images on Instagram: one of the wedding mandap, which featured an auspicious pyre, and the other of the bride and groom, which was a lovely portrait of them.

Actor Varun Dhawan also took to his social media handle and congratulated Alia Bhatt and Ranbir Kapoor. The actor wrote, “Congratulations @aliabhatt & Ranbir wishing u guys a lifetime of love, happiness, and joy. Welcome to the other side.” 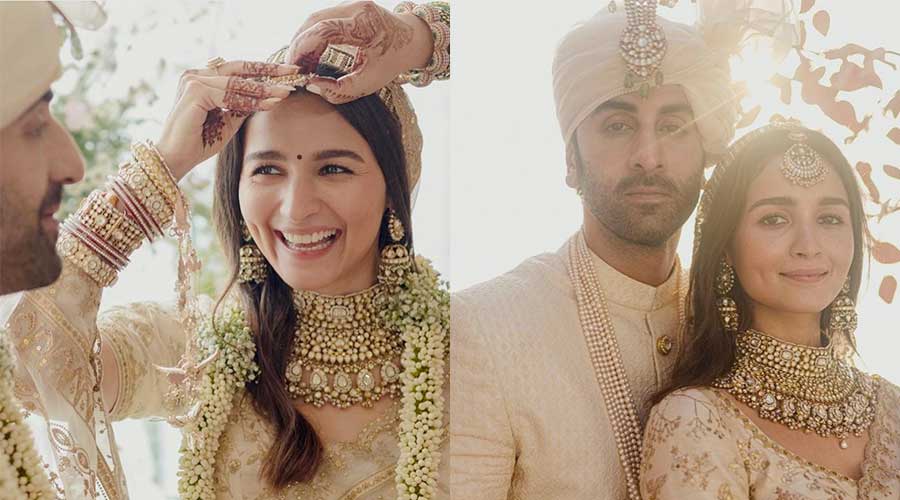 Who was in attendance at Alia Ranbir’s wedding?

Since 2017, Ranbir Kapoor and Alia Bhatt have been dating. The couple made their first public declaration of love by coming in together at actress Sonam Kapoor’s Mumbai reception in 2018. In 2018, the couple appeared together at Sonam Kapoor’s wedding reception, which served as more confirmation of their relationship.

In an interview, when Ranbir was asked about his relationship with Alia, he said, “It’s new to us, so please give it some time to cook.”

Recent appearances include Gangubai Kathiawadi, directed by Sanjay Leela Bhansali’s latest film, and the upcoming Brahmastra, directed by Ayan Mukerji, in which Alia will star alongside Ayan Mukerji.

We wish the couple a very HAPPY WEDDING… ☺ ☺